Next to his ubiquitous quotation about the corrupting nature of power, Lord Acton’s best-known aphorism may be that “liberty is the delicate fruit of a mature civilization.” In his newest book, Samuel Gregg plunges deep into the roots that nourish the ecosystem of human freedom. Reason, Faith, and the Struggle for Western Civilization explores how ratio et fides – reason and faith – have been integrally conjoined as the foundations of liberty and human dignity. 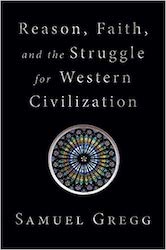 Western civilization blossomed as three tectonic strands of thought converged. The Jewish diaspora familiarized the Roman Empire with monotheism and the ethics embodied in the Decalogue. Greek philosophy, which had reasoned its way to an embryonic and incomplete monotheism of its own, taught that an unseen wisdom, or logos, ordered all of creation and allowed the human mind to participate in the transcendent. Philo of Alexandria harmonized these two systems of thought as completely as Scripture and conscience allowed. Finally, Christian universalism taught that all people are children of one God and subject to one standard of truth. Thus, the rational order embedded in natural law revealed, in a rudimentary sense, the character of the Almighty.

The notion of a rational God animated theologians, from the Christian Platonists and Augustine to Maimonides. In due time, when the civilization matured, it would have profound meaning for human rights and limited government. The rejection of a God Who is pure will leads to constitutional limits that constrict the arbitrary exercise of power. “Arbitrary government, [even European monarchs] understood, was widely regarded as infringing the demands of justice and reason and thus risked resistance, as Charles I of England discovered,” Gregg writes. It is “much harder to imagine the delegitimizing of slavery, the affirmation of the essential equality of men and women, or the de-deification of the state and the natural world without the vision of God articulated first by Judaism and then infused into the West’s marrow by Christianity.”

Having enjoyed the fruits that the two historic faiths of the West brought to maturity, humanity seems determined to decouple reason and faith, from one another and from everyday life. With a philosopher’s insight, Gregg pinpoints the consequence of this great divorce. “Do you understand,” he asks, “that unless the West gets the relation between reason and faith right, it will be unable to overcome its inner traumas or defend itself from those who wage war against it in the name of particular ideologies?”

Reason, Faith, and the Struggle for Western Civilization is a compact and accessible introduction to the history of Western thought that any undergraduate could digest in an afternoon – and profit from for a lifetime.

The heart of our cultural confusion beats in the typical undergraduate survey class. In this telling, faith – which is contrasted with reason – ruled during the “Dark Ages,” when regal churchmen persecuted the development of science and free inquiry. The Reformation legitimized theological speculation, while the Enlightenment gradually removed the blinders of faith altogether, allowing Westerners to think rationally and empirically. This history – which conflates all of Christendom with the condemnation of Galileo and all of the Enlightenment with the skepticism of Voltaire, Rousseau, and Hume – has become the modern secularists’ founding mythos.

The book proceeds to prove its thesis about the proper alignment of faith and reason, as Gregg demonstrates the philosophical trends that created what he calls “faiths of destruction.” He is at his most provocative, and relevant, when discussing “authoritarian relativism.” Appropriate tolerance, which is rooted in the Judeo-Christian respect for humanity’s freedom to search for truth, devolves into tyranny by first leveling, then proscribing, all truth claims. This “dictatorship of relativism” as Pope-Emeritus Benedict XVI called it, promotes polylogism every time its foot soldiers beg people to speak “my truth,” especially if their “lived experience” never intersects with ontological reality. It is this milieu which must be redeemed.

In this volume, Gregg accomplishes two breakthroughs. The first is that he covers the birth of Western order until the twenty-first century, and takes the reader from despair to hope, in the space of 166 pages (and 15 pages of footnotes). The second is that he leaves the reader hoping for more. One would have been fascinated to read his thoughts on transhumanism, the logical marriage of Prometheanism and scientism, for example. However, delving into contemporary issues may have unnecessarily dated this volume. Reason, Faith, and the Struggle for Western Civilization is a compact and accessible introduction to the history of Western thought that any undergraduate could digest in an afternoon – and profit from for a lifetime.

People of faith may be challenged by a book that calls on them to broaden their mind, no less than to deepen their faith. Yet repairing this breach in popular imagination is the point of Gregg’s book. It would be incorrect “to say that devout Christians were universally opposed” even “to various Enlightenments,” Gregg notes. He shows how Catholics and Protestants, whether Scottish Presbyterians or French Jesuits, cultivated critical engagement with Enlightenment thought.

Just as materialists cannot experience life to its fullest by reducing all human thought to flashing neurological impulses, neither can Christians reach their potential apart from the renewal of their minds. This Pauline phrase implies that, for God fully put their talents to use, their sanctification demands that they develop their mind to its fullest extent. In so doing, they will follow the footsteps of the greatest thinkers, writers, and saints of their tradition.

St. Clement of Alexandria – in ways, an intellectual heir to Philo Judaeus – wrote in his Stromata that he would “not shrink from making use of what is best in philosophy” in service of the faith once delivered unto the saints. He ascribed to philosophy among the Greeks an analogous role to that which he assigned to the Hebrew Bible among the Israelites: to prepare them to accept the Gospel. He suggested philosophy had been revealed directly by God to the Greeks. (He also believed, erroneously, that Plato had read the Septuagint.)

This late-second/early-third-century authority shows that the tension between faith and reason within faith communities is hardly new. He rebuffed those who said Christians should have no recourse to philosophical concepts and categories. “I am not oblivious of what is babbled by some, who in their ignorance are frightened at every noise, and say that we ought to occupy ourselves with what is most necessary, and which contains the faith,” he wrote. “Others think that philosophy was introduced into life by an evil influence.” Instead, he held that, by facilitating contemplation and self-control, “philosophy is in a sense a work of Divine Providence” and “conducive to piety.” Conversely, it was Tertullian – who asked rhetorically, “What has Athens to do with Jerusalem?” – who ended his life in heresy, a critic of the civilization constructed by the fruitful dialogue between those two citadels.

People of faith recognize that the West is crying for rejuvenation. Thankfully, those who follow this program of reintegrating piety and reason will find that the Western mind has within itself the seeds of its own renewal.

Rev. Ben Johnson (@therightswriter) is an Eastern Orthodox priest and served as Executive Editor of the Acton Institute (2016-2021), editing Religion & Liberty, the Powerblog, and its transatlantic website. He has extensively researched the Alt-Right. Previously, he worked for LifeSiteNews and FrontPageMag.com, where he wrote three books including Party of Defeat (with David Horowitz, 2008). His work has appeared at DailyWire.com, National Review, The American Spectator, The Guardian, Daily Caller, National Catholic Register, Spectator USA, FEE Online, RealClear Policy, The Blaze, The Stream, American Greatness, Aleteia, Providence Magazine, Charisma, Jewish World Review, Human Events, Intellectual Takeout, CatholicVote.org, Issues & Insights, The Conservative, Rare.us, and The American Orthodox Institute. His personal websites are therightswriter.com and RevBenJohnson.com. His views are his own.