Saving Capitalism: For the Many, Not the Few is the latest addition to Robert Reich’s cohort of publications. He is perhaps best known for his previous work The Work of Nations (1992), which raised the issue of growing inequality in the public sphere. Alongside his writing, Robert Reich is also a professor at the University of California at Berkeley and has served in various positions under the administrations of Gerald Ford and Jimmy Carter. Most notably, he was U.S. Secretary of Labor under President Bill Clinton between 1993 and 1997. 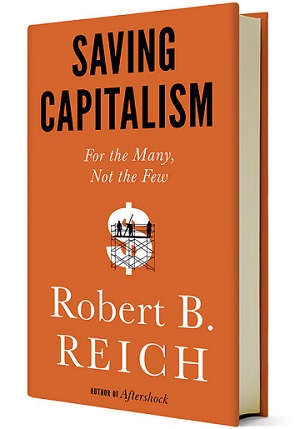 At the age of 71, Reich brings a lifetime of experience in both academia and politics to the table. As a true social-democrat, Reich’s Saving Capitalism is a continuation of the themes he discusses in previous publications – some of which include rising inequality, the not so "free" marketplace, the over-concentration of political and economic power in the hands of a few, the disenchantment of the masses, and others.

As the title may suggest, Saving Capitalism is a critique of the free market structures and modern-day capitalism. Reich argues that decision-making power is increasingly concentrated in the hands of a few, at the expense of the "many." The very rich get richer and more powerful, while the middle and lower classes get weaker and poorer. The entire system is rigged against the majority in favour of a concentrated few. The solution to this injustice, Reich suggests, is an “activist government that raises taxes on the wealthy, invests the proceeds in excellent schools and other means people need to get ahead, and redistributes wealth to the needy” (p. xvii).

Does this narrative sound familiar? To many it certainly will. Robert Reich’s Saving Capitalism is therefore one among numerous publications that champion the social inequality-class warfare thesis. In that sense, the book brings little-to-nothing new to the debate. Nonetheless, it is well-written, and its use of colloquial language grips the reader. This does, however, make the book read like more of a socio-political novel rather than a macroeconomic or political account. One cannot help but feel that Reich’s desire to push his own personal narrative has come at the expense of rigorous analysis.

But before jumping to any conclusions, let’s briefly touch upon the structure and content.

Saving Capitalism is comprised of three main parts. The first chapter, titled “The Free Market,” aims to show how in fact "free markets" are not "free" (p. 85).

One cannot help but feel that Reich’s desire to push his own personal narrative has come at the expense of rigorous analysis.

As you may have already guessed, Reich argues that this is due to them being controlled by a select, powerful few that both establish and control rules in which a "free market" operates. He argues that there are five "building blocks" of a free market: property, monopoly, contracts, bankruptcy, and enforcement. Each of these requires human governance and can be used to either promote a fair and decent society or can be manipulated to benefit a select few (p. 9). This first part of the book argues that the latter has occurred. The stronghold on patent laws by pharmaceutical companies, the large lobbying budgets of corporations to maintain dominant market positions, and the abuse of bankruptcy laws are all cited as evidence that the entire system is rigged in favour of an elite few.

The second part of the book is dedicated to showcasing the consequences of such a rigged system. Here Reich argues that free market meritocracy is in fact, a myth. Those at the top increase their own wages whilst those at the middle and bottom see their wages stagnant and in many cases, decline (pp. 134-167).

In the third and final chapter, Reich argues for a restoration of countervailing power, or in layman’s terms, bringing power back to the people. The means by which he believes this can be achieved are certainly not new: an increase in the minimum wage, amending labour laws to favour unions, and changing contract laws as to encourage employees and workers to take action against unjust employers (pp. 153-217).

So, while Robert Reich’s latest work presents a compelling critique of the challenges facing twenty-first century capitalism, it brings little new to the table. Moreover, any truly impartial reader that has some basic understanding of economics would be quick to observe that Saving Capitalism is unabashedly lopsided. There is no doubt that Western capitalism is at a crossroads, and the aftermath of the financial crisis has left millions feeling disenfranchised. However, Robert Reich portrays injustices within the free market (as real as they may be), as characteristic of the entire economy. It’s a bit like saying, we can’t play football anymore because one of the players faked an injury.

He also seems to portray an over-the-top form of class warfare: the elite vs. the rest - as if the classes are statutory and unitary groups with no movement or change between them. The rich and powerful only stay rich and powerful, while the rest suffer the consequences of their actions. We know this is simply not the case – a free market economy does indeed reward creativity and work. Whether intentionally or unintentionally, Reich left out any deeper economic discussions, such as aggregate supply and demand, and its impact on market meritocracy.

This brings us to what is perhaps the most significant pitfall of the book: It is far too rooted in anecdotal storytelling rather than political or economic analysis. No matter how broad Robert Reich’s experience may be, personal examples should always be an addition to the argument and not its foundation.

Having said that, Saving Capitalism offers some captivating thoughts on the current state of free market. Provided that its rather superficial and politicised arguments are viewed through a critical lens, the book is certainly a worthwhile read.

This review originally appeared on the website of the Centre for Enterprise, Markets & Ethics and is reprinted with permission.