Events of the last week – notably the general election 2017 – have produced what appears to be a seismic shift in the British political scene. As of the time I’m writing this review, I wait in fear and trepidation to see whether Theresa May’s Conservative Party will form a stable government or whether it will fall to Jeremy Corbyn’s Labour Party. Corbyn’s policies, such as the renationalisation of private railway companies, seem to take us backwards into a different era of politics – leaving a new generation to fight ideological battles that many had believed would never need to be fought again. 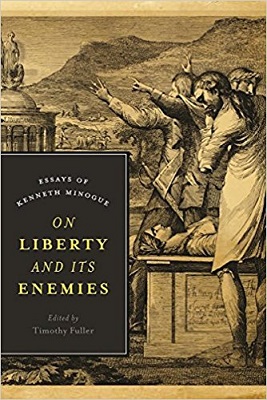 When engaging in philosophical fisticuffs, it is always beneficial to consult Kenneth Minogue, the exponent of a free society who taught 40 years at the London School of Economics. Minogue’s essays – some 20 in all – selected for this excellent and wide-ranging volume, offer timeless insights into the vital issue of liberty and its enemies. They explore many themes including ideology, individualism, opposition, liberalism, democracy, and totalitarianism. Written over a period running from 1961 until the year of his death, 2013, they speak in direct and uncompromising fashion to today’s issues, from the origin of our troubles to our likelihood of vanquishing them.

Minogue is scathing in “The Roots of Modern Dogmatism” about ideology, a subject he found “narrow, repetitive, limited in range, and saturated in rancor.” Like many, he was tempted to regard ideology as just another form of religion – he cites the rituals of communism associated with Lenin’s tomb, as well as its “passion for doctrinal purity” – but he rejects this comparison. Despite their universality, ideologies have no foundation than their own interior reasoning. To Minogue, the key to understanding and combating ideology is to bring into the open whatever philosophical doctrine and consequent “vision of a true and heavenly harmony” that creates its uncompromising claim on people’s loyalties; only then can its feasibility be tested and exposed as a mere dream. It is instructive to apply his approach to contemporary ideologies. For instance, many in the transatlantic sphere dream of an equal society but never consider what order would emerge when all their dreaming has ended. What forms of control and oppression would be required to maintain absolute equality? Minogue’s work may inspire us to ask ever more probing questions.

“Christianity is and remains at the heart of our civilisation,” argues Minogue in “Individualism and its Contemporary Fate.” What is inherent in Christian belief is the conferral of legitimacy on a higher order of obligations that individuals must fulfil when conflicts arise with traditional laws and customs. This brand of individualism is more than an ideal but is part of the fabric of Western life and lies at the heart of what it means to be free. Critical of any notion of “one right order,” he sees true individualism exemplified by characters as disparate as the Viscount of Orte refusing to massacre Huguenots or Robinson Crusoe’s heroic self-sufficiency.

He warns how the welfare state undermines individualism: Capitalism relies on contract, which requires us to interact with others and allow others to make reciprocal claims on us. The welfare state confers on us status and rights, which isolate us and make us dependent. This insight might lead the reader to speculate whether the widespread hostility to, and active suppression of, traditional Christianity in the West will weaken the individualism and consequent expressions of conscience that attend it, so that the loss of freedom becomes accepted without serious question.

For Minogue, freedom led to “oppositionality,” a topic he explores in “The Conditions of Freedom and the Condition of Freedom.” Oppositionality is the idea that citizens may exercise an independent judgement on questions of their obligations that were once off-limits for discussion; everyone simply accepted them. Opposition and is seen both as a “disruptive and dynamic” part of freedom but also a threat to it – “fundamentally parasitic” on society and often praising dissent for its own sake.

This leads naturally to “The Modern Liberal’s Casebook,” which contains Minogue’s well-known comparison of liberalism to the legend of St George and the Dragon. In his telling, St. George didn’t know when to stop fighting battles and grew breathless in pursuit of smaller and smaller dragons, as big dragons were harder to come by. In this Minogue is quite correct. Taking his analogy further, there must come a time when dragons become extinct and younger versions of St. George are misguided into pursuing chickens and other desirable species instead.

This portends poorly for our collective future. Minogue suggests that democracy has been little more than transitional phase between monarchy and an elite oligarchy in “Some Doubts About Democracy.” The term “liberal democracy” is seen as both a correct yet contradictory notion that often involves frustrating the will of the people through devices such as human rights, international treaties, and political spin.

Worryingly, in “Totalitarianism: Have We Seen the Last of It?” he sees fertile soil for totalitarianism in, say, the use of education for social engineering, with vital barriers – religion and family, that support individuality – no longer standing in its way in Europe. He demonstrates how the risk of totalitarianism shadows the West in “Seduction and Politics.” Seduction of the electorate can follow either “low temptation or perverse high-mindedness” and can work equally well through “drama and flattery.” The Nazis seduced a population by giving them a supposed “higher duty to humanity … a mission to save the world from corruption.”

Minogue concludes that instead of seeking “insane perfectionism” by, e.g., trying to abolish world poverty, we should simply be happy to live decent moral lives. This is, in effect, a challenge to build a better world by expressing our individuality through greater commitment to the institutions of family, markets, and church – an invitation simultaneously less exciting than undertaking grand projects and less destructive, as well.

Minogue’s final paper was delivered to the Mont Pelerin Society in the Galapagos Islands before his death and was a version of the last essay in the volume, “The Self-interested Society.” In it, he points to the uniqueness of our free society and warns that its evolution was not inevitable. Rather, it “emerged from an immensely complex set of social and moral contingencies.” As we have become preoccupied with its flaws, it has become progressively vulnerable to “dreams of perfection.” One of the dangers of conservatism is that conservatives tend not to be activists. Life is filled with too much that is beautiful to be concerned with such pedestrian dullness. Yet this volume might encourage many to reflect on how fragile their individuality, their sense of self, their freedom is – and to fight for it.

(Photo credit: Live Zakynthos. This photo has been modified for size. CC BY 2.0.)

Stephen F. Copp, Ph.D., is currently researching and writing a novel set in England’s Tudor era and a historical work relating to England’s maritime past; he also composes poetry and song. Formerly a legal academic, his past roles included serving as associate professor at Bournemouth University and visiting professor at St. Mary’s University, Twickenham, London. He was awarded a Ph.D. for his inter-disciplinary thesis, “The Early Development of Company Law in England and Wales: Values and Efficiency.” Hereceived a Seldon award (joint) in respect of the Hobart paperback, The Legal Foundations of Free Markets.