Bulgaria unveils a statue to Ronald Reagan in the battleground for religious liberty.

Ronald Reagan remains the most influential U.S. president of the latter half of the 20th century. He is remembered as an optimistic advocate of free minds, free markets, free elections and the free exercise of religion. But gratitude, a universal human emotion, is not limited to the United States. Instead, it extends across the transatlantic sphere to the former Soviet bloc.

On May 10, in Sofia, the capital city of Bulgaria, officials unveiled a monument of President Ronald Reagan. Just nine days later the bust, which was erected in Sofia’s South Park, was vandalized—a red stocking pulled over the bronze head, vampire-looking paint put on the face, and the statue and the marble pedestal smudged in white. Volunteers immediately cleaned up the statue.

What was behind the vandalism? Ronald Reagan’s legacy vexes die-hard Communists more than a decade after his death on June 5, 2004. The growing popularity of Communists (and extremists favorably disposed to Nazism) is on the rise in Bulgaria. In a strange twist, due to the better life that Reagan’s ideas brought about, there is a growing trend of Bulgarians forgetting the misfortunes of the past.

The nation is undeniably better off today than under Marxism. In 1994, the country’s GDP was $9.7 billion (U.S.); in 2016, it was $50 billion. Since Eurostat started measuring Bulgaria in 2004, the households here have enjoyed the highest growth of real income in the EU (8–9 percent annually) and people live longer.

But the most important aspect of the statue, and its current placement, may be that this is the spot where religious liberty began to blossom in Bulgaria in the modern era.

The other Reagan Revolution

My attachment to this bust is not simply that it was erected in Sofia’s South Park, where I taught my kids how to walk, play soccer and skate. It is not even simply that I became friends with many of the economists who worked with Reagan’s two administrations. I bear a personal attachment to President Reagan’s deeds.

Some say that in the mid-to-late 1980s, South Park became to Bulgaria what Hyde Park was to Chicago in 1969. The cause of public discontent was the government’s persecution of its Turkish minority. Although the policy continued for decades, the government intensified pressure during this time. From 1984– to 1985, atheistic officials began a campaign of renaming Bulgarian Turks with Slavic names at gunpoint. Public discontent reached its peak in 1989. Between May and August of that year, the regime began forcibly expelling Turks, with hundreds of thousands ultimately leaving the nation. In October, we went out to the streets—at first in small numbers—protesting against what seemed to us the most evidently anti-human nature of the secularist regime.

An international environmental conference, which brought foreign diplomats to the city, allowed a more prominent protest, this time on environmental concerns. I was one of the organizers of the event. On October 26, which happened to be my birthday, the militia cracked down on us by force. The police violence, however limited, caused an outcry abroad and resistance at home and motivated diplomatic démarches by U.S. and European ambassadors. (The American ambassadors of the Reagan era, especially Sol Polansky and Hugh Kenneth Hill, deserve a monument of their own.) Wary of further scandals, and already isolated internationally even by the Soviet Union over its policy against the Turks, the Communist authorities announced South Park as a dedicated spot for public gatherings.

Free speech had won its first victory in South Park.

Underground civic groups of all sorts moved their rallies to the park. First, opposition conferences were channeled to a nearby cinema hall and several key organization committees met in my kitchen. Human rights activists gathered bigger and bigger crowds in the park. Different oppressed religious groups crawled out from obscurity. One of them was the Bulgarian Church of God, an evangelical Protestant group that was officially banned in 1949 and operated for decades without legal protection.

A week after the October 1989 breakthrough, we moved our rally downtown to formally submit signatures on a petition to the Parliament dealing with the environment, but we used the occasion to call for democracy.

After another week, on November 10, the old regime collapsed.

By Christmas 1989, we forced the Communists to back off their campaign and allow Turks to resume using their Muslim names. In January 1990, we forced the Communist Party into a series of roundtable talks. And in June of that year, we held the first free elections since 1931 for Constitutional Assembly. I won the majority vote in my constituency. Members of the Bulgarian Church of God helped me distribute leaflets around my electoral district, which for some reason happened to be the largest in the country; clearly, I could not have led the campaign without volunteers.

In the second half of 1990, Bulgaria started its meandering journey back to normalcy. This was the thing we dreamed of: restoring democracy, property rights and the rule of law.

Ronald Reagan’s diplomacy had triumphed. It was time to express our thanks.

Reagan’s statue is not without precedent in South Park. Since 1996, the park has featured a monument of Manfred Wörner, the ex-secretary general of NATO who helped Bulgaria’s reorientation to the West. (Bulgaria has taken part in all NATO operations since the Gulf War of 1991.) The country became a member of NATO in 2004 and joined the EU in 2007.

The idea of a Reagan monument had simmered for a decade. A student organization had proposed the idea at the municipal level in 2005. In 2011, for the 100th anniversary of Reagan’s birth, South Park’s main alley was named after him. Members of the committee to build the monument had been members of the anti-Communist opposition, albeit from different political backgrounds: scientists, lawyers, doctors, heirs of dissidents murdered by the Communists, Orthodox Church priests, businessmen and university students. The chairman Vladimir Kisyov, former U.S. ambassador to Bulgaria and chief negotiator of Bulgaria’s EU membership. These people raised the donations to build the monument. 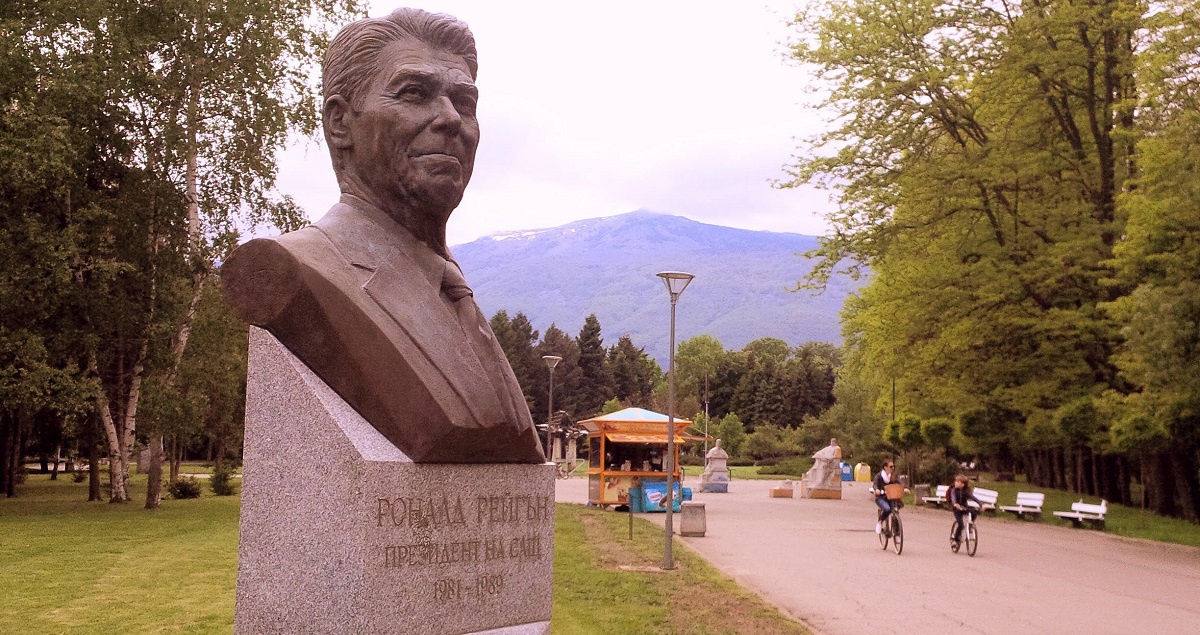 The statue of Reagan in Sofia's South Park

The unfulfilled blueprint for the liberation of Bulgaria

The vandalism of Reagan’s monument is sometimes explained among Bulgarians as revenge for the belittling of a Soviet Army monument, by painting the soldiers as Western superheroes. (There has been a civic movement in Sofia to remove this monument for 12 years; opponents believe it represents the occupation of Bulgaria, not its liberation.) A Reagan statue is said to be in complete opposition to the Communist Party.

However, it bears remembering that Communist reformers were the first to liaise with President Reagan’s associates in February 1990. They took control of the government and attempted to steer it toward a more market-oriented economy, although one they would maintain their strong influence over.

Then-Prime Minister Andrey Lukhanov asked the U.S. Chamber of Commerce for help drafting a blueprint for his nation’s transition. The National Chamber Foundation responded, and a privately funded team, led by Dr. Richard Rahn and Dr. Ronald Utt and including former Reagan administration officials, submitted to the Bulgarian government the “Proposal for a Bulgarian Economic Growth and Transition Project.” I met the group in October 1990.

This blueprint was never implemented. Politicians were not interested in its outlines. Some attempted implementing their own brand of reforms. However, years later, they have returned to the same Rahn-Utt team set of ideas, often after bitter government failures, high social costs, hyperinflation and public discontent.

Richard Rahn concluded 30 years later: “Despite the many disappointments and setbacks, Bulgaria is now a far better place than it was in the late 1980s. The people are essentially free and living under a parliamentary democracy.” He added: “One of the tangible and important side benefits of the transition project was the creation of the Institute for Market Economics (IME), which has served as a highly productive and influential ‘think tank.’ IME continues to promote free markets, free people and a civil society.”

All of this—democracy, a firmer commitment to the rule of law, economic prosperity and mobility and the growing religious freedom at the heart of every free Western society—can be traced to the courageous actions of Ronald Reagan. Those involved who lived through those days will never forget him. Now this monument in Sofia’s South Park assures that future generations will remember his role in their religious, political and economic freedom as well.

Featured image for this article courtesy of heimoaga.com.

Krassen Stanchev is a professor in Public Choice and Macroeconomic Analysis of Politics at Sofia University in Bulgaria, where he also teaches the history of economics at the post-graduate level. He is also CEO of KC 2 Ltd. and board chairman, founder, and former executive director of IME, Bulgaria’s first independent, free-market think thank. He is a former member and committee chairman of Bulgaria's Constitutional Assembly (1990-1991), and a principle drafter of reforms leading Bulgaria from central planning to a market economy.