This morning, as Americans go to work for the first Monday of the New Year, a growing number will see their wages rise to $15 an hour or more – thanks, not to higher minimum wage laws, but to the bustling free market. Increasingly, economists agree that in the frenetic labor market of 2020, the minimum wage has become virtually irrelevant.

No one disputes that workers are earning higher salaries in 2020, and the lowest earners have received the biggest boost. James Pethokoukis of AEI writes:

Average hourly earnings for all employees have increased by 3.1 percent over the past year, with earnings for production and nonsupervisory employees up 3.7 percent. Not bad given low inflation and, unfortunately, low productivity growth.

But perhaps the most encouraging data point is how the lowest-paid workers continue to experience faster wage growth than workers overall, which wasn’t the case in the first years of the post-Great Recession recovery.

Pethokoukis notes that unemployment stands at a 50-year low of 3.5 percent, and employment rates for prime-age workers 25 to 54 have returned to pre-recession levels.

But some claim wages are rising due to “pressure” from the Fight for $15 movement, which has induced a handful of cities to increase their minimum wage. Is this true?

The Federal Reserve Bank of Atlanta weighed this assertion in the balance and found it wanting.

The Fed compared the relative median wages of the states that increased their minimum wage between 2014 and 2019 to those that did not. (Interestingly, the states that did not alter their wage laws had a higher relative median wage.) Analysts found that both sets of states improved overall, regardless of legislation. This suggests that “the increased tightness of labor markets, or some other factor than hikes in state minimum wages, is playing a role in pushing up the pay for those in lower-wage jobs.”

The U.S. economy has exploded, thanks to a bout of tax-cutting and deregulation that rewards investment. The resultant national prosperity has required employers from Sinclair Broadcasting, to Target, to Amazon to increase their minimum to $15 an hour voluntarily.

Mark J. Perry of AEI quotes a Wall Street Journal article that, although the nation’s minimum wage has not budged from $7.25 an hour in a decade, today only “a tiny share of Americans, just 0.28% of the 156 million civilian workers earned the federal minimum last year [2018], according to the Labor Department. … Most of those employees were younger than 25 years old.” 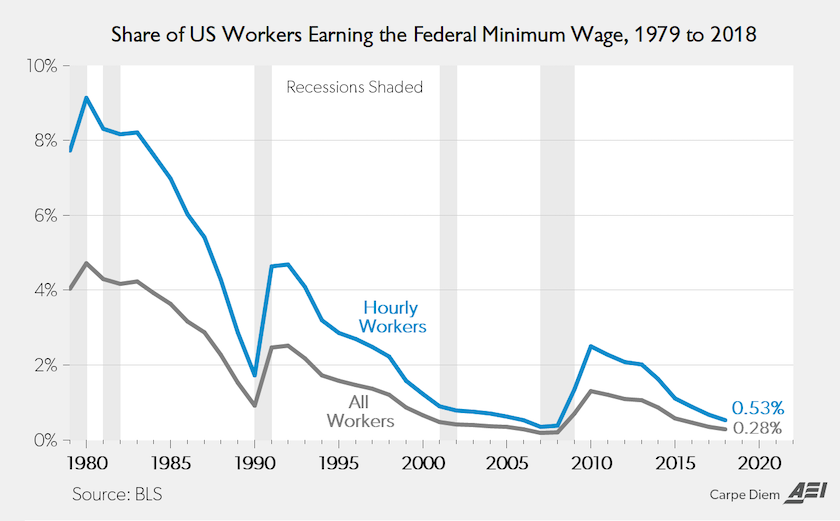 This accords with federal statistics. The Bureau of Labor Statistics found that, in November, average hourly earnings for all employees on private nonfarm payrolls rose to $28.29. In fact, the government states there is not a single industry in which the average hourly wage does not exceed $15 an hour. (Employees in the lowest-paid industry, leisure and hospitality, earn an average of $16.77 an hour. People in the information sector earn $42.29.) 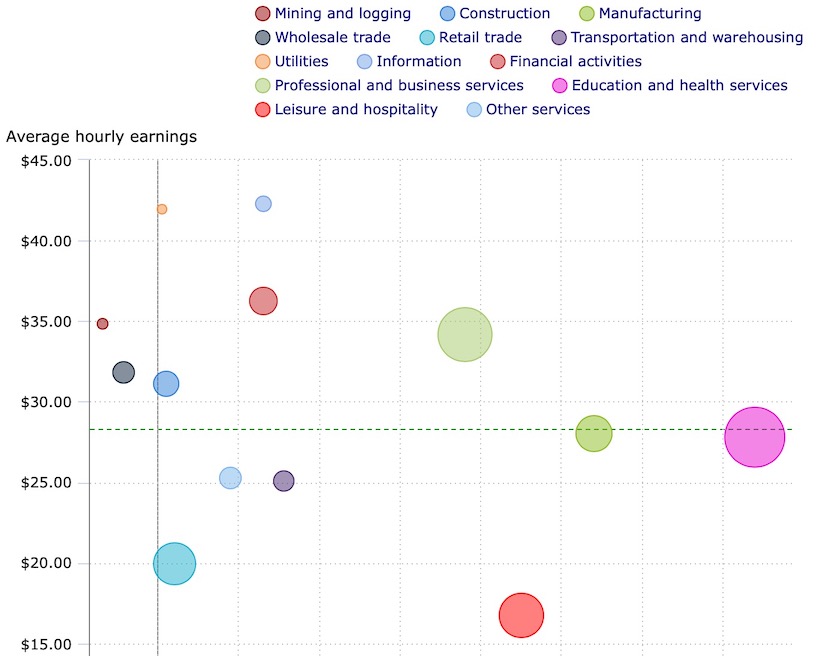 The WSJ says, in this economy, the minimum wage teeters on the brink of becoming “irrelevant.”

Many well-intentioned people believe raising the minimum wage is an imperative of the Christian faith. Democratic presidential hopeful Pete Buttigieg has voiced this view.

Something can scarcely be a moral necessity, critical to the survival of millions, and irrelevant at the same time.

Once again, economic interventionists miss the point: They assume laws create economic realities. But wages are rising, because employers must compete with one another for the most qualified workers. When corporations freely raise workers’ pay, it reflects real market conditions. Companies realize a pay hike is necessary to hire or retain the best talent, and they offer no more attractive a salary and benefits package than they can afford. They alone have this information; government neither has it nor seems to care.

When government artificially raises the minimum wage, it pressures the most vulnerable businesses and punishes economically weaker areas, leaving their workers – and citizens – jobless. The trauma of unemployment runs deeper than momentary salary reductions. “The absence of work damages the spirit, just as the absence of prayer damages practical activity,” said Pope Francis.

What matters to the poor is not higher minimum wage laws but higher wages. Economic freedom creates the prosperity that raises their pay. And less stultifying regulations will assure this productive bidding process continues to let all people use their God-given talents for the service of others.

(Photo credit: Mike Mozart. This photo has been cropped and modified. CC BY 2.0.)