Christians who oppose government intervention are often accused of harboring indifference, or antipathy, for the poor. But an abundance of evidence from two continents shows that welfare state policies actually reduce the wealth of the poor and raise prices, while benefiting the upper-middle class and well-connected corporations at taxpayers’ expense.

A report from the European Central Bank analyzed 13 European nations and found that the higher the level of social welfare programs - the sort of entitlements many equate with "democratic socialism" - the less wealth people owned.

“[T]he degree of welfare state spending across countries is negatively correlated with household net wealth,” because government benefits became “substitutes for private wealth accumulation.” Rather than accrue resources to care for their families, they simply became dependent on the government – but the impact is less pronounced if the family is already well-to-do. Thus, ‘an increase in welfare state spending goes along with an increase – rather than a decrease – of observed wealth inequality.” 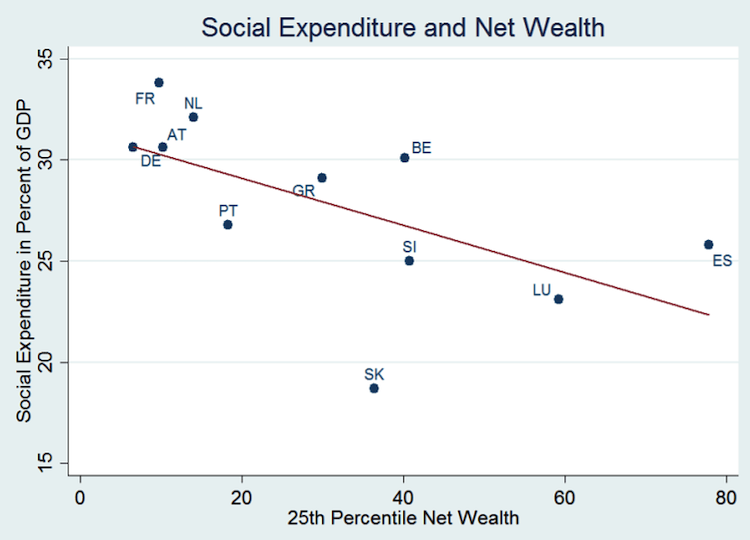 A prime example of a program that benefits the upper-middle class is the UK’s Help-to-Buy program, introduced in 2013 by David Cameron’s Conservative-Liberal Democratic coalition government. It merely expanded on Cameron’s FirstBuy program for first-time homebuyers, instituted in 2011.

Homebuyers can put as little as a five percent down payment on a newly built (but not an existing) home, borrow 20 percent in a shared equity loan, and finance the remaining 75 percent with a traditional mortgage. The 20 percent government loan is interest-free for five years.

Analysts find the program raises housing prices by five to eight percent. Furthermore, the government loan must be repaid at the home’s current value, not the cost at the time of its purchase; if the value of the home doubles, so does the amount of the loan.

As housing prices rise, the poor cannot afford even five percent of the total so, cui bono – who benefits? Simply put, the wealthy. The program is not means-tested, so twice as many government loan recipients earned £100,000 a year (placing them well within the top five percent of UK income earners) as made less than £30,000 a year. Nearly two-thirds of all recipients said they could have afforded to purchase their home without the program, according to the National Audit Office.

That locks the poor out of the benefits of homeownership, the primary source of personal wealth. Homeowners may possess 42 times more wealth than Brits who live in social housing, according to one report from the Human City Institute, based in Birmingham.

But the real money goes to well-connected corporations. The UK’s nine largest housing firms made £2.3 billion from the government scheme. Merryn Somerset Webb of the Financial Times explains:

Look to Persimmon, developer of some of the meanest looking houses in Britain (don’t take my word for it, go and look on their website). Half of its sales are Help to Buy. Pre-tax profits have just passed £1bn. Operating margins have just hit a record 30.8 per cent. Think about that: this isn’t a company, it’s a state-sponsored taxpayer exploitation machine.

“It’s a policy that boosts the bank balances of big developers but has nothing to offer the average renter,” said Polly Neate, the chief executive of the charity Shelter. Yet Help-to-Buy account for 38 percent of all newbuilt home sales.

The United States’ more modest housing policy has yielded similar results. “The Fannie Mae and Freddie Mac policy of easing requirements for purchasing homes since 1996 was found to be associated with a small rise in housing prices,” according to the Heritage Foundation. In addition, the two government-sponsored entities (GSEs) sell bundled securities to investors with profits guaranteed by the U.S. taxpayer, no matter how the home loans perform.

Housing policy consists of taxing everyone to benefit the upper-middle class, and courting moral hazard to secure investors’ profits.

When the government tries to provide a human need like housing, prices rise and quality drops while the elite thrive at the expense of everyone else. Economic interventionism, rather than the free market, guarantees that “the rich get richer and the poor get poorer.”

People of faith who wish to see the less fortunate thrive should heed the disastrous consequences of well-intentioned welfare state policies.