The ironic thing about equality laws is that they do not promote equality. Instead, by defining individuals by a single characteristic, they tend to breed division and tribalism. Rather than looking to the uniting force of our shared humanity, equality law audaciously demands that some people are created more equal than others and that we must celebrate their particular, protected characteristics, even if doing so violates our conscience. 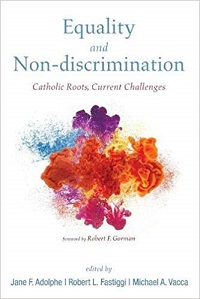 Special interest groups representing competing "rights holders" spend millions of dollars campaigning, and exerting immense moral and political pressure, to assure they earn a privileged spot in an "equality hierarchy." Such has been the situation time and again in every jurisdiction, nationally and intergovernmentally, where comprehensive non-discrimination laws have been passed.

With the United States now looking to adopt its own “Equality Act,” a measure which would amend the 1964 Civil Rights Act and the 1968 Fair Housing Act to include sexual orientation and gender identity as protected classes, a comprehensive and compelling treatment of just how great a threat non-discrimination laws pose to the fundamental freedoms Americans enjoy could not be more timely. This is precisely what we get from Equality and Non-Discrimination: Catholic Roots, Current Challenges, edited by Jane F. Adolphe, Robert L. Fastiggi, and Michael A. Vacca.

Each chapter approaches the issue from a different perspective, providing us a fulfilling and comprehensive look at the issue of the principle of non-discrimination. From looking at the philosophical underpinnings of non-discrimination laws, to providing a historical analysis of the advent of the principle of non-discrimination from a Catholic perspective, to getting down into the nuts and bolts of just how menacing laws promoting sexual orientation and gender identity (SOGI) can be, Adolphe et al. cover the jurisdictional spectrum from Asia to South America, and everywhere in between. The book is a must read for those concerned about what adoption of the “Equality Act” might mean for Americans, in an era marked by what Robert F. Gorman describes in the foreword as “exaggerated subjectivism and the denial of fundamental truths rooted in reality.”

A philosophical approach to equality and non-discrimination

In the book’s first essay, co-editor Robert L. Fastiggi provides a unique introduction to equality law by suggesting an alternative hermeneutic to establishing true equality: the equal dignity of all human beings from conception until natural death, grounded in their common rational nature. Fastiggi convincingly unpacks the Catholic Church’s teaching that all humanity shares the image of God, because the rational spiritual soul is what makes us truly human.

Fastiggi suggests that the principles of equality and non-discrimination have become more complex in recent years because they are being extended to behaviors and lifestyles, not merely to persons. Not all forms of behavior, he argues, are equal. He explains that equality is rooted in biology and natural law, as well as the constant witness of cultures and religions throughout human history.

Continuing in the same vein, Ernest Caparros sums up the Christian theological premise of equality and difference within humanity. All are born in God’s image and baptized into radical equality but distinguished by their callings. He notes that this principle was diminished by the medieval understanding of societas inequalis (which is often inferred as clericalism). However, this principle was firmly re-established by Vatican II, where a proper understanding of the sharing of priests and the laity in Christ’s priesthood, each in their respective condition, was a focal point. All are mutual participants in the unique mission of the church with equal dignity, acting as different parts in one body.

In chapter three, Daniel B. Gallagher makes a case for reclaiming the natural law in order to reach a proper understanding of equality. His thesis is that natural law is the ontological priority of ends over purposes. Natural law recognizes that there are ends in things and that our purposes and choices must respect their priority. He postulates that there are four ways in which the truth of ends can be obscured: impulsiveness, moral obtuseness, immaturity, and vice. He closes his argument by suggesting that if we are to show how truth occurs, it is necessary to first show how truth is hidden.

SOGI laws and the marginalisation of Christianity in the West

From the theological and philosophical treatment of equality in the first three chapters of the book, Ryan T. Anderson decidedly changes gears and puts the issue of non-discrimination laws under a microscope. In what may be the most powerful and convincing chapter of the book, he argues that current proposals to create new LGBT protections in the United States give immense amounts of privilege to a few, while doing tremendous damage to the fundamental liberties of many. SOGI laws, he argues, diminish religious freedom, freedom of speech, freedom of conscience, and educational rights, while only giving limited exemptions to religious organisations.

Anderson makes the point that such sweeping legislation is not at all necessary where more tailored policies can achieve the same ends: preventing the mistreatment of those who identify as LGBT without depriving a large portion of Americans of their substantive freedoms.

Iain Benson then looks at the current paradigm of equality as a “swindle,” a meaningless word so vague that it can evade accountability and eventually corrupt thought. He rightly points out that we live in a time where everyone thinks equality is a good idea but not one in a hundred can tell you what it means, or how it can be achieved. As he artfully contends, forms of decontextualized “equality” or “discrimination” fail to respect diversity and tend towards authoritarian societies.

Monsignor Piotr Mazurkiewicz’s chapter on the redefinition of equality and human rights in the European Union is perhaps one of the best treatments of the development of European anti-discrimination law ever written. He cuts through incredibly dense and complex legislative history, distilling the issues and how these laws came about with both surgical precision and ready accessibility. Like Anderson, he poignantly argues that giving churches a religious exemption is not the solution because, at a minimum, this gives the public appearance that churches are state-sanctioned discriminators. Not only does this appearance damage the public perception of churches and doctrine, but it will lead to those exemptions being taken away.

British Barrister Paul Diamond, who personally argued some of the leading equality and religious freedom cases before the European Court of Human Rights, paints a dark picture of Western concepts of secular egalitarianism. His argument is based on two principles: 1) there is a prevailing ideology of human rights and equality which presupposes, and thus dominates, all legal discourse; and 2) Western culture has an active animus towards Judeo-Christian belief and practice.

He argues that the aforementioned human rights ideology seeks to "domesticate" religion by passing through four stages. The second-to-last stage, where he argues the United States currently finds itself, is actively disincentivizing people from religious belief. State laws punishing Christian service providers for not participating in same-sex weddings would be an example. The final stage, to which he suggests the United Kingdom is slowly creeping, is the criminal sanction of Christian belief. He provides criminal “hate speech" laws as an example where the expression of beliefs about sexual practice or the absolute truth of Christianity can lead to criminal sanction.

The Global Emergence of the SOGI Agenda

The closing chapters of the book look at the emergence of the principles of sexual orientation in other parts of the world. Carmen Dominguez Hildago chronicles the shocking emergence of the SOGI agenda in the Americas through heavy-handed judicial activism at the Inter-American Court of Human Rights. She helpfully outlines the Atala v. Chile case and its implications before looking at the legislative implementation of sexual orientation as a privileged class at the state level. She juxtaposes the aggressiveness of the SOGI agenda at the intergovernmental level against the domestic laws of many nations in the region, which either do not recognize sexual orientation or still prohibit homosexual activity. Hildago's strong picture of cultural imperialism over the region foreshadows more secular, culturally aggressive policies arriving in other regions in the future.

Professor Ursula C. Basset delves further into the Inter-American system. She begins by highlighting the unique nature of the 1969 American Convention on Human Rights (ACHR) as a document that explicitly enumerates a right to life from the moment of conception and places a high premium on family. She notes that the Inter-American human rights system is unique - and recounts the historical vulnerabilities its member states have faced, including inequalities based on poverty and social class. Her interpretation of Article 1 of the Convention is highly illuminating. The right to life as defined in the ACHR bases equality on our common humanity. She provides an honorable defense of the original intent of the Convention as promoting family and human dignity, then compares it to some of the case-law which she describes as contradictory, controversial, and more European or Northern American than Latin American. This chapter is a must read for anyone interested in the original meaning of the Convention and how it has broken from its roots.

Dr. Brian Scarnecchia provides an interesting and strategic chapter about the Association of Southeast Asian Nations’ (ASEAN) Declaration of Human Rights (ADHR), a document which is unique to international law in that it explicitly affirms regional values and national sovereignty. He argues that it was the intent of the declaraton's 10 parties to insert their own cultural and regional rights, and national sovereignty, into the stream of the prevailing Westernized human rights ideology. He offers a road map to ASEAN, and advocacy groups, to protect the cultural integrity of these nations from international pressures relating to abortion and the LGBT agenda. It is one of the few critiques of human rights ideology I have come across which posits some helpful solutions to level the proverbial playing field.

Finally, Geoffrey Strickland’s analysis of religious freedom and Christianity in the Middle East and North Africa in the context of the papal visit to Turkey in 2014 delves into Pope Francis’ response to a reporter’ s question about Islamophobia and Christianaphobia. Strickland notes that the manifestation of Christianaphobia in the Middle East and North Africa has meant an attempt in some areas to eradicate Christians all together, either by displacement or genocide. The chapter offers a poignant analysis of how true equality can be created in a region where terms like fear, phobia, and other neologisms are fast becoming obsolete.

The book is highly recommended to anyone interested in the issue of equality and non-discrimination. Too much is at stake not to be informed about these key issues. Several of the chapters are powerful enough to warrant book-length treatments of their own. Professor Benson was right to say that not one in a hundred people know the meaning of equality or how to achieve it. It is my sincere hope that people will read this book and come to a more comprehensive understanding, rooted in the precious inheritance handed down by the West.

Roger Kiska is a solicitor for England and Wales and a member of the Michigan State Bar. He is legal counsel for the Christian Legal Centre (London). Kiska has acted in numerous cases before the European Court of Human Rights and the Court of Justice of the European Union. He has also served as an elected member of the Advisory Panel of the European Union’s Fundamental Rights Agency. In 2012, Kiska received the prestigious Scandinavian Human Dignity Award for his legal contributions towards human rights. He is a frequent contributor to television and radio, including the BBC, Sky News, Channel 5, and ITV.