A  woman who woke up from a thirty-year coma in 2018 would be forgiven if she looked around and came to believe our world is falling apart.

Cable news and social media are a steady drumbeat of negativity. There is a sense the world is not right.

The woman who emerged from her coma would have little or no idea that the world is experiencing an economic miracle, just as most people today do not. But it’s happening just the same.

As the Washington Post reported last week, people around the world are joining the middle class on a scale hitherto undreamt of (to borrow a phrase from Dr. Strange).

This revelation came during an interview with Brookings Institution scholar Homi Kharas, who noted that the world is quietly nearing a historic milestone few would have dreamed possible a generation ago.

“By 2020, more than half of the world’s population will be ‘middle class,’” the Post reports.

The surge, driven largely by a middle-class explosion in India and China that is now spreading to Southeast Asia, is perhaps the most incredible demographic shift ever witnessed.

It’s easy to forget that the middle class barely existed for most of modern history.

“There was almost no middle class before the Industrial Revolution began in the 1830s,” Kharas notes. “It was just royalty and peasants. Now we are about to have a majority middle-class world.”

Being Middle Class Is a Big Deal

One need not go all the way back to the dawn of the Industrial Age, however, to see just how extraordinary this milestone is. Our World in Data shows that 60 percent of the world still lived in extreme poverty as recently as 1970.

It’s important to note that reaching the middle class is not a mere class designation. Nor is it simply a matter of money. (A family of five in Burundi living on $324 a year would qualify, according to Gapminder foundation, a non-profit cited by the Post, as would a family of five in China clearing $121,000 annually.)

Reaching the middle class is transformative as a life experience. There may be very few differences between being wealthy and being middle-class, but the quality of life between poverty and middle-class is stark.

From a global perspective, living in the middle class means having luxury items most Americans view as basic essentials: access to transportation, air conditioning, electricity in their homes, and running water.

Anna Rosling Rönnlund, the founder of Gapminder’s Dollar Street project, said perhaps the most telling sign of people reaching the middle class is the presence of store-purchased hygienic items.

“The most striking thing is so many of the people we visited so far actually have a plastic toothbrush,” Rönnlund told the Post. “It’s the same with soap. Almost everyone in the world has access to some kind of soap. The poorest buy a tiny fraction of a soap bar or make it themselves. When you come to the middle, you see people buying locally produced, big bars of soap.”

Americans Have an Odd View of the Middle Class

Historically 85-90 percent of Americans have self-identified as middle class. Even the more recent figure of 60 percent is well above what is actually defined as the middle class in America. Gallup surveys show that only about 2 percent of Americans self-identify as “Upper” class, which suggests many Americans have little understanding of their actual wealth. Breathless narratives about a “shrinking U.S. middle class” from politicians and media—which often neglect to mention that America’s middle class is shrinking because Americans are getting wealthier—have probably added to the confusion. 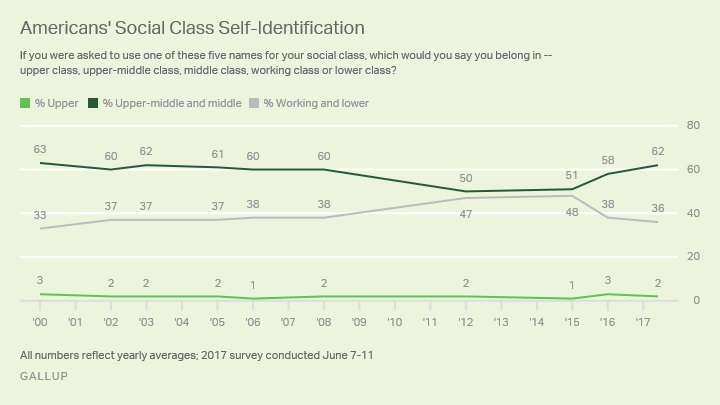 Whatever the case, the revelation that, globally, the middle class has grown at such an astonishing rate is welcome news. It also invites an important question: to what do we owe this grand achievement?

A glance at the chart below reveals that the decline in world poverty took place during the Pax Americana, a period notable for relative peace that witnessed the defeat of socialism and an unprecedented expansion of freedom and trade. (As oppressive as China’s system may be politically, there’s no question it underwent vast economic liberalization beginning in the 1970s.) 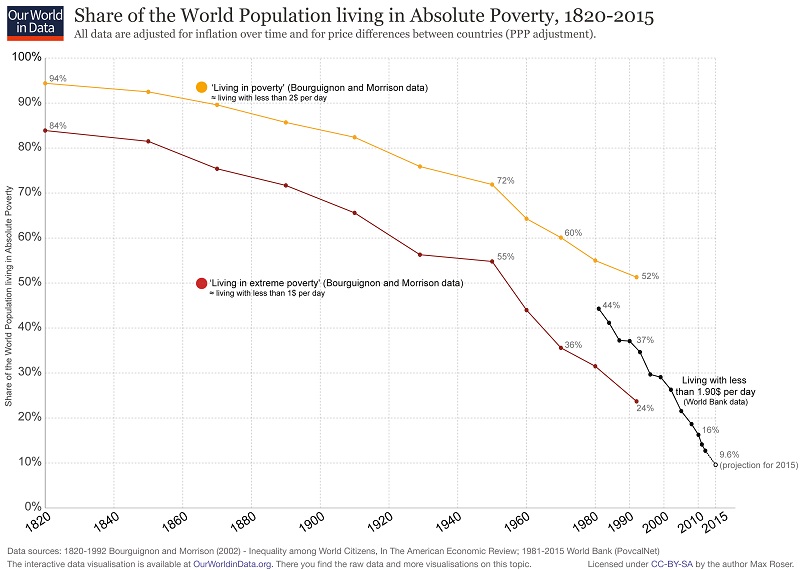 It’s unclear if we’re at the beginning of the Pax Americana or its end. Only time will tell.

Whatever the case, the last 70 years reveal what can be achieved when humans and nations work and trade together.

Reprinted with permission from the Foundation for Economic Education.

Jonathan Miltimore is the Managing Editor of FEE.org. Serving previously as Director of Digital Media at Intellectual Takeout, Jon was responsible for daily editorial content, web strategy, and social media operations. Before that, he was the Senior Editor of The History Channel Magazine, Managing Editor at Scout.com, and general assignment reporter for the Panama City News Herald. Jon also served as an intern in the speechwriting department under George W. Bush. He received degrees from the University of South Dakota (M.A.) and the University of Wisconsin-Platteville (B.A.), where he studied history and literature. Follow him on Facebook. Follow him on Twitter: @miltimore79.