Almost two centuries ago, an angry man sat down to write an essay expressing deeply held thoughts and prejudices. His subject was Desdemona, wife of the Moor Othello, who murders her in the final act of Shakespeare’s play. The essayist was John Quincy Adams, former president of the United States.

His insights are jarring to the modern reader. Rather than seeing Desdemona’s death, as the tragic result of Othello’s manipulation by Iago, John Quincy Adams regards it as her “just deserts.” 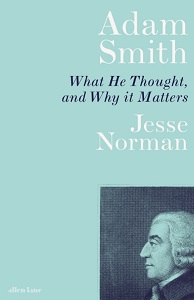 He writes: “We never can sympathise much with Desdemona because we never can separate her from the estimate that the lady is little less than wanton … She falls in love and makes a runaway match with a blackamoor.” To John Quincy Adams, the moral of Othello is less about the iniquities of racism than a “salutary admonition against all ill-assorted, clandestine and unnatural marriages.”

Shakespeare scholars are well used to wildly differing interpretations of the same play. But to the layman, this defies belief. Surely Othello can mean only one thing. Yet, as with so much of Shakespeare’s work, the play resists classification and refuses to slot neatly into a single political narrative.

Exploring how this principle applies to a different set of canonical writing is the mission Jesse Norman has set himself in his latest book – only this time, taking the work of the "founding father" of modern economics, Adam Smith.

In an already polarised political climate, Smith’s reputation has tended to divide the crowd. As Norman, who has somehow written this book while working as MP for Hereford and a Transport Minister, notes: “For many on the right of politics, he is a founding figure of the modern era … an eloquent advocate of the freedom of the individual and the staunch enemy of state interventionism.

“For many on the left, he is… an apologist for wealth and inequality and human selfishness – and a misogynist to boot.”

Norman has the same insight as Robert Caro in his magisterial tomes on Lyndon Johnson: The first step to understanding how someone thought is to understand the world in which he was thinking. The first third of this book is therefore dedicated, not to Smith’s beliefs, but to a quick-fire biography of the man himself, from birth to death in under 150 pages.

Here, Norman has a good eye for the telling detail, attributing, for example, the strained relationship between Samuel Johnson and Smith to Johnson’s Scotophobic descriptions in his dictionary (“Oats: grain which in England is generally given to horses, but in Scotland supports the people”).

By the time we reach the second part of his book, entitled simply “Thought,” we possess the background knowledge – backed up by helpful insights from Norman – to understand how Smith’s thought developed.

Smith soon emerges as very different from the buccaneering free marketer of myth. Norman’s revisionist assessment rejects both left- and right-wing caricature, detailing the complexity and some of the contradictions underlying Smith’s thought.

For example, Smith was innately sceptical of massive profits. He believed that properly functioning markets required good government and regulation, and suggested a tax on rents not in spite of, but because it would "in general fall heaviest on the rich." He even advocated the labour theory of value, the discredited Marxist notion that the value of a good should be determined by the optimal amount of labour that went into its creation, rather than the amount a purchaser is willing to pay for it.

We also learn that, rather than being the oafish woman-hater dismissed by Naomi Klein for ignoring their economic contributions, Smith had a surprisingly progressive grasp of the plight of women in eighteenth-century Britain.

“The laws of most countries being made by men, generally, are very severe on the women, who can have no remedy for this oppression,” Smith wrote in Letters on Jurisprudence. This is a highly radical observation made, as it was, some 50 years before Jeremy Bentham would question the denial of women’s suffrage in his Plan of Parliamentary Reform – and more than a century and a half away from equal franchise.

In its closing section, Norman’s book summarises the insights and details gleaned in previous pages to examine how Smith would react to contemporary issues such as rising inequality and crony capitalism. Unsurprisingly, Norman has to do most of the heavy lifting here.

Smith would doubtless have objected to concentrations of wealth, Norman argues, convinced as he was that monopolies are bad for everyone. But one of the consequences of the groundbreaking nature of Smith’s work, as well as its philosophical grounding, is that passages can be found across his writing to justify a wide array of opinions. That is not to say that he did not have opinions of his own – but Norman ably rescues the economist from the tangled weeds of his own popular legacy.

Yet just as the internal morality of a play like The Merchant of Venice cannot be judged solely by Shylock’s protestations of his own humanity in the famous “Hath not a Jew eyes” speech, nor by Early Modern anti-Semitism alone, equally, Smith’s thoughts cannot be taken individually or devoid of context. In demonstrating this, while also providing a well-researched and eloquent book for anyone interested in economic thought, Jesse Norman has achieved something both original and deeply impressive.

‘Adam Smith: What He Thought, and Why It Matters’ by Jesse Norman MP is published by Penguin Books. £25, 400pp.

This article was originally published by the Institute of Economic Affairs and is reprinted with permission.