Every Good Thing: An Introduction to the Material World and the Common Good for Christians. David Jones.
(Bellingham, WA: Lexham Press, 2016), 144 pages.

As a professional ethicist teaching at a Southern Baptist seminary, David Jones inhabits at least three cultures. He is an academic with publications in various journals and books; he is a student of the evangelical church and its many quirks; perhaps most significantly, he is adept at walking students through complex ethical principles. As a teacher, Jones knows that people need general principles that lend themselves to clear application. That understanding lies at the heart of Every Good Thing: An Introduction to the Material World and the Common Good for Christians. 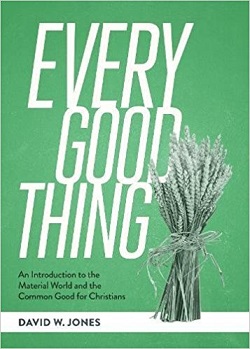 Rather than a dense work of economic theory, Jones provides a framework that enables Christians to live in the world as material beings. He contends that, since human beings are embodied souls, economics must matter to the Christian. He traces economics back to the Greek word oikonomia, (“house-law”), defining it as both individual housekeeping and global “housekeeping.” Economics need not be a terrifying discipline populated with infinite graphs, statistics, and theories. Jones presents an economic framework accessible to all Christians, and explains how each part of his theory may be applied.

His theory begins by recognizing the Christian tendency to be overly focused on spiritual realities. “Many Christians seem to think the material realm is evil,” he writes; “after all, we’re supposed to focus on the spiritual realm, right?” This rhetorical question allows Jones to define the material world as “the world in which we live” and the object of God’s care. “This little book aims to show that as Christians we must be concerned with the material world, both for our own good and for the good of our neighbours. Indeed, biblically speaking, the material here-and-now is just as important as the sweet-by-and-by.” This world is God’s creation, the site of divine redemption, and the natural habitat of humanity. Therefore, living well in the material world is vital for human flourishing.

If the material world matters, then our work in the world takes on new significance. Jones targets the typical attitude towards work, arguing that “few of us are fond of the concept.” Jones traces the notion of work back to Adam in the Garden of Eden, showing that work predates the Fall. Work, then, is part of God’s good creational design. We human beings are intended to work. Jones writes:

The Bible describes work as a privilege, not as a grudging necessity. God is a worker, and he made humanity to work. In fact, our daily labor is one of the most important ways in which we can functionally bear the image of God in the material world. Misunderstanding this concept will have grace practical implications: Rather than being masters of our work, we will become its slave; rather than ruling over our work, our work will rule over us.

Work is grounded in our nature as image-bearers of God; when we work well, we demonstrate God’s nature in the material world. This reality is a uniquely defining characteristic of humanity: “Of all the living beings God made, only people were given a job and directed to work,” he notes. Jones’ view of humanity living well in the material world begins with evaluating our attitude towards work; he contends that when we view our work as a divinely given vocation, we will find joy in ourselves and be one step closer to flourishing.

This argument about work pairs neatly with Jones’ view of rest. He dedicates substantial space (20 pages) to analyzing the biblical concept of the Sabbath, arguing that work and rest create a sort of reinforcing loop that enables human flourishing. Jones explains that “[p]roperly defined, the Sabbath is fundamentally about rest, and it is an eternally relevant concept. However, we must keep in mind that rest is not synonymous with inactivity. ... The Sabbath commandment relates rest to holiness and worship.”

“Successful ministry to the poor cannot be measured by how much we give away, but by how many people we can help overcome and remain out of poverty.”

The biblical picture of human activity involves living in the world, working with and in it, and using the product of those labors to set aside time for restful worship of the Creator. Jones guides the reader through three Old Testament patterns based on this principle: one day in seven, one year in seven, and the fiftieth Jubilee year (following seven sets of seven years). Rest, Jones argues, reminds us of the fullness of rest promised in Christ. Regularly practicing the Sabbath both recalls the Gospel and demonstrates faith in God’s provision.

This cycle of work and rest, Jones argues, is not guaranteed to lead to wealth. He stringently opposes the “prosperity Gospel,” which “claims that material wealth is a sign of spiritual health.” Living in accord with reality, Jones argues, leads to flourishing. Learning to inhabit the rhythms of work and rest tends to result in the accumulation of greater wealth over time.

After establishing the scriptural views of work and rest, Jones dedicates a chapter to the biblical perspective of wealth and want. Jones also considers what Christians should do to relieve privation. He divides poverty into three classes: poverty caused by personal sin, poverty caused by natural evil (disasters), and poverty caused by oppression from others. Responses to poverty, Jones argues, fall into aid approaches or developmental approaches. Which approach should be used depends upon the type of poverty under consideration. If aid is given to those whose poverty is caused by unrepented sin, “our efforts can insulate them from the effects of their sin, thus robbing them of a natural motivation for repentance.” Jones favors developmental approaches over aid approaches to poverty relief in most circumstances, in part because “[a] final problem with aid-based models to poverty relief is that they have historically tended to propagate relief organizations.” He sums up his view of Christian poverty relief, saying “successful ministry to the poor cannot be measured by how much we give away, but by how many people we can help overcome and remain out of poverty.”

Throughout Every Good Thing, Jones models a Christian ethical approach. He poses a clear question, surveys the relevant biblical passages, and explains his view with references to the scriptural texts. Each chapter concludes with a summary section and a list of “action points,” making this book ideal for a book club, reading group, or class discussion. David Jones has written a helpful corrective calling Christians to consider their anthropology as embodied souls and the implications of the material world for human flourishing. His work serves as an introduction to scripturally sound economic principles and models the approach of a biblical ethicist. His writing is clear, his method helpful, and his insights into economics help Christians to live in distinctively Christian ways in the material world.