The subtitle of Rupert Darwall’s book about "the totalitarian roots of the climate-industrial complex" seems designed to appeal to readers who are already skeptical about current climate change and environmentalist policies. While his book definitely proves the thesis implicit in its title, it is far more than a handbook for “skeptics.” Green Tyranny is a must-read for every person who cherishes freedom and who wants to know how environmentalism could become so powerful that, in some countries, it seems like a new state religion.

The author intended this book to complement his earlier work, The Age of Global Warming, which was critical of policies and initiatives aimed at fighting climate change. In Green Tyranny, he wanted to focus on continental Europe in general, and Sweden and Germany, in particular.

In the preface, we learn how Darwall sees Germany:

German culture harbors an irrational, nihilistic reaction against industrialization, evident before and during the Nazi era. It disappeared after Hitler’s defeat and only bubbled up again in the terrorism and anti-nuclear protests of the 1970s and the formation of the Green Party in 1980.

As a German, I must rate his judgment of my nation quite accurate. 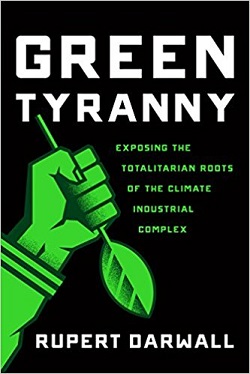 By choosing Sweden as an example, he picked the ideal showcase of a Western country where the government significantly managed to shape public opinion about environmentalism over the decades. But even more interesting is the role of Sweden’s politicians especially during the 1960s and 1970s, who were critical in setting up various UN organizations that lead, among others, to the United Nations Framework Convention on Climate Change (UNFCCC).

Darwall presents a wealth of details to explain how a powerful Green/Left network managed to occupy key political positions in Europe and the U.S. and to establish (or gain control of) institutions that give them unquestioned authority over the subject. Learning about this development, it is particularly frustrating to read how these institutions were often created by financing from very wealthy donors.

He also explains how the onslaught on freedom happens openly (if unnoticed by the media and general public) by highlighting a crisis of global proportions – such as man-made climate change – which requires solutions that “normal democracies” aren’t able to provide. They must be settled by a council of experts, which acts outside the democratic process.

It is surprising to read that over time almost all political parties did their share in promoting the Green interventionist agenda. If not the entire party, then some senior politician would do so, even in a conservative or classic liberal (libertarian) party. For instance, he writes: “The use of NGOs as shock troops to overwhelm business opposition to environmental protection had been envisaged by a top German government bureaucrat, Günter Hartkopf, in a 1986 address to his civil servant colleagues.” It is crucial to know that Hartkopf was a member of the Free Democratic Party (FDP), Germany’s classical liberal party.

Green Tyranny is a must-read for every person who cherishes freedom and who wants to know how environmentalism could become so powerful that, in some countries, it seems like a new state religion.

Darwall also examines individual policies designed to stave off climate change. In the case of Germany with its “Energiewende,” the effort to decarbonize the economy, he proves that even after billions of dollars in government spending and ever-rising electricity costs for consumers, Germany’s CO2 emissions remain basically the same. Meanwhile, the grid’s stability has continuously deteriorated. Despite its obvious absence of success, Germany relies more heavily upon wind farms and photovoltaic solar power systems. Darwall concludes that numerous issues pushed by the Greens were merely publicity stunts, resulting mainly in higher costs, less growth, and diminished freedom.

Darwall is adamant when he regards environmentalism as a serious threat to freedom and cites alarming examples of how the Green agenda managed to influence, not only politics, but public opinion and industrial policy, as well. Darwall links a number of Green ideas in Germany, like the use of wind turbines for power generation, back to the Nazis – a connection which, while definitely interesting, is of secondary importance for me. The general anti-freedom sentiment that infuses transatlantic environmentalism is Darwall’s overall theme, and it is exactly this threat he demonstrates perfectly in his book.

While Darwall’s book does not claim to be academic literature, it comes with almost 50 pages of endnotes, which will encourage diligent readers to dig deeper into the subject. As with any book, he could have written even more on specific topics, e.g., the origin of the Club of Rome and the role of Aurelio Peccei, whom he mentions once. Knowing that every book could be longer, and not every reader appreciates books approaching Randian dimensions, I am very happy with the current length of the book.

It is rare to read a book on a topic that one is very familiar with and yet learn so many new facts and details. Green Tyranny is this kind of book, and I am convinced that it contains a wealth of information for readers at almost every level of expertise on the subject.

Considering the importance of this book for understanding the situation we face today I hope that, at a minimum, a German version will be published soon.

(Photo credit: Mark Klotz. This photo has been cropped. CC BY 2.0.)

Prior to joining the private think tanks, he worked for the classic liberal Friedrich Naumann Foundation for Freedom in Germany, and abroad as project director in Southern Africa and country representative in Zimbabwe. From 1996 to 1998, he undertook an empirical study in India on the impact of deregulation on Indian SMEs.

Wolfgang Müller studied at the University of Konstanz in Germany and graduated in 1991 with an M.A. in Business Administration/Major: International Relations (Structural Adjustment Programmes in Sub-Saharan Africa). He is member of the Mont Pelerin Society, the Friedrich August von Hayek Society, and serves on the advisory board of the Freedom and Entrepreneurship Foundation in Katowice, Poland.