“It is tempting, if the only tool you have is a hammer, to treat everything as if it were a nail.” – Abraham H. Maslow in Toward a Psychology of Being.

And if that hammer is the power of the state, and if the wielder is unconstrained by morality or a worthy goal, then the result is bound to be a Hell on earth for everyone but the wielder. This was certainly the case of Stalin and what he did to Ukraine. Anne Applebaum’s Red Famine describes how the Soviet regime turned the breadbasket of Europe into an Armageddon where neighbor turned on neighbor, millions were starved to death, and the Communists showed themselves to be priests, crusaders, jailers, and torturers for the Evil One. 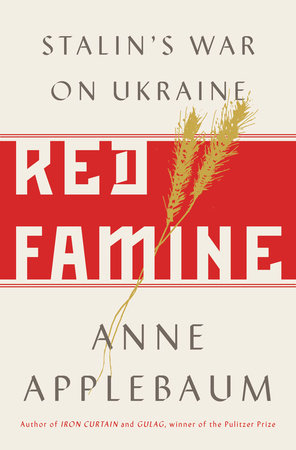 The early twentieth century was not easy on the Russian Empire cum Soviet Union. One of the greatest challenges Stalin faced in the late 1920s was the need to control agriculture and the peasantry. He wanted to continue increasing industrial production and needed a way to feed his burgeoning urban workforce cheaply. Price controls and forced requisitions, the usual statist approaches, had proven counterproductive during the period of War Communism (1917-21), because they had decreased supply and alienated the peasantry, leading many to revolt. Opening agriculture up to market forces under the “New Economic Policy” (NEP, 1921-28) had increased production and quieted the countryside but was unacceptable for reasons of both ideology and control. In Ukraine, it had the added ill effect of strengthening a traditional bourgeois icon, the successful and independent farmer or, in the native language, kulak. Stalin needed to find another way. His ideology, Marxist-Leninism, had taught him that the peasantry was an unreliable ally with little to no class consciousness, and history had taught him that just banging harder on quotas and requisitions would lead to non-compliance and revolution.

Stalin’s solution was to transform the unwieldy mix of existing farms of various sizes and organization into a completely state-owned and centrally managed system of agricultural factories, or kolkhozes, doing to agricultural production what the Bolsheviks had previously done to industrial production. This would also solve the “peasant problem” by turning them all into de facto workers, a class that the Communists understood and knew how to control. Requisitions and quotas would be used both as part of the process of identifying rural bourgeois kulaks and as an excuse to drive them from their homes and land when they refused to comply. Their land would then be available for the collective farm, or kolkhoz. This policy had been tried under War Communism, but at that time the nascent Soviet state lacked the capacity to implement it in the face of fierce opposition. This time, it was ready.

What made the Soviets so effective in their wickedness was their ability to get ordinary people to support – or at least to allow – such evil.

The resulting process of collectivization was demonstrably wicked, empowering thugs and naïve idealists who used the force of the state to legitimize the worst kind of banditry. Nor was it simply a matter of immoral policies being enforced with a heavy hand, although there was plenty of that. One of the most effective tactics was to broaden the definition of kulak to anyone who opposed collectivization and then apply that broader definition capriciously, so that every villager was at risk of finding himself or herself in the crosshairs of the Soviet mobs. Not only did the resulting fear increase the number of villagers who were willing to give up their old way of life in favor of joining the kolkhozes, it also created a climate in which neighbors were encouraged to inform on one another, a tried and true tactic of totalitarians everywhere. The driving force behind this policy was to raise the quotas of free grain required from the villages and farmers unreasonably high. This led farmers to grow less and consume or hide everything they had. The Soviets used the latter as further excuse to arrest farmers, ransack their homes for all the food they could find and drive their families from their land. Once again, this process was aided by the willingness of scared and starving villagers to turn on their neighbors. Without the participation of ordinary people, the impossibly high quotas could not have been enforced, food could not have been stolen, the border to Ukraine could not have been closed (aid was not allowed in during the famine, and villagers were not allowed to emigrate), and 3.9 million people would not have starved. One might expect this kind of behavior from naive idealists, ideologues and thugs; what made the Soviets so effective in their wickedness was their ability to get ordinary people to support – or at least to allow – such evil. This book gives detailed and heartbreaking descriptions of what this complicity looked like.

This story of collectivization and the imposition of high quotas has been the standard explanation for the starvation death of up to 6 million (Applebaum gives the more conservative estimate of 3.9 million) souls in Ukraine from 1932-33, and Applebaum does a good job of describing it and its various mechanisms in great but readable detail. If it stopped there, Red Famine would be a convincing indictment of the Soviet experiment and of any government that is willing to move its control over the economy too far past the governing of the commons. However, she proves something more: Stalin wasn’t just trying to master agricultural production; he was trying to subdue Ukraine and eliminate “Ukrainian” as anything but a vestigial administrative description of the people who happen to be living in a particular Soviet Socialist Republic.

The Holodomor – “death by hunger” in Ukrainian – was, as the subtitle of the book describes, part of “Stalin’s War on Ukraine.”

The Ukrainian problem was not a new one for Moscow. In addition to outright war, Russian imperial policies designed to Russify Ukraine included outlawing the use and teaching of the Ukrainian language, arresting its leaders, banning nationalist groups, and large-scale resettlement. The Soviet war on Ukraine, along with the current one led by President Putin, is just a continuation of that same effort. One of the reasons for this effort is the propensity of Ukrainians to organize in defense of their land and their freedoms. Stalin knew of this firsthand from the early years of the Soviet Union when the Ukrainian countryside, led by nationalist intelligentsia, organized itself into armies and militias to drive out various threats, to include Russian nationalists and Communists. Under War Communism, Moscow declared war on everyone involved. As with the agricultural policies of War Communism, the Soviet state lacked the capacity to sustain that effort. Just as it allowed Ukrainian farmers more freedom during the next few years, so too did it allow more freedom for Ukrainians to use their language and organize according to their interests. As with the kulaks, this did not last; in the long term, all it did was put a target on the back of everyone who might have stood in the way of Soviet totalitarianism.

Applebaum describes many people and groups who fell prey to this dynamic. As a Ukrainian Orthodox clergyman whose Church (the Ukrainian Orthodox Church of the USA) was largely established by Ukrainian nationalist emigres, I appreciated her description of the fortunes of the nationalist Ukrainian Autocephalist Orthodox Church (UAOC). The atheist Communist regime allowed it to operate through the 1920s, in part because it helped undermine support for the larger Russian Orthodox Church and in part because it was strongest in the parts of Ukraine where the Soviet state had the poorest penetration. As the Soviets switched away from the NEP toward collectivization to subdue the peasants, it simultaneously moved against the intelligentsia. In 1929, the Soviets arrested 30,000 intelligentsia, to include teachers and UAOC clergymen, for their participation in the Union for the Liberation of Ukraine (Soyuz vyzvolennia Ukrayiny, SVU), an organization that was completely made up by Soviet intelligence to justify a strong response against Ukrainian nationalists. The UAOC did not survive that strong response and was soon forced to disband. As with the kulaks, once the Soviets had identified and moved against real Ukrainian nationalist leaders and supporters (and although its primary purpose was spiritual, there is no doubt that the UAOC fit into this category), they broadened the definition to include anyone who might be capable of working against the Sovietization of Ukraine, to include ethnic Ukrainian Communist Party leaders. The widespread crack down on Ukrainian leaders and nationalists paved the way for what Applebaum refers to as the “revolution in the countryside” and ensured that resistance to the Holodomor would be local and ineffective.

There is a third aspect of Moscow’s “War on Ukraine” that needs to be considered, and that is disinformation. Because they were unconstrained by virtue or faith, the Soviets had no commitment to the truth. For them, truth was determined by necessity, and the facts of history were established by the proper application of power. They were masters of disinformation, agitation, and the false flag. This was nowhere more evident than with regard to Ukraine and the Holodomor. From then until now, Moscow has worked to hide and then reinterpret the intentional starvation of at least 3.9 million Ukrainians, even forcing the redefinition of “genocide” so that its application to the Soviet atrocities in Ukraine would be debatable. They continue to use their expertise and the full power of the state (including its media) to demonize Ukrainian nationalists and anyone who might challenge Russian imperialism.

Recent events have shown that this power can also be used against us in the West. In this, we are similar to the kulaks in the late 1920s, assured of our virtue but not well enough organized to protect ourselves, our ideals, our unity, and our way of life against the Russian agents and bullies and naïve idealists who support them. While the threat to our way of life is not existential – as it was and is in Ukraine – it is real. Books like Anne Applebaum’s Red Famine should lead us to treasure our freedom more dearly and recognize the need to defend it.