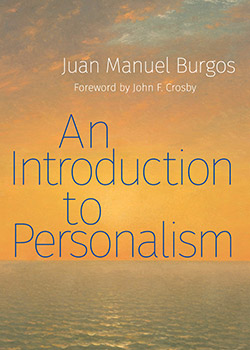 If it is true that “nature abhors a vacuum, ” then we ought to expect new ideas to arise in place of those which have proven false. Juan Manuel Burgos contends that personalism is the philosophical framework to revitalize Western thinking in the aftermath of the twentieth century, and his Introduction to Personalism is a readable introduction to a fruitful philosophical conversation.

Burgos defines personalism between two extremes. On the one hand, there are “collectivisms” like socialism and Communism that reduce humans to infinitesimally small players within a system. Materialist determinism fits on this end of the spectrum, reducing the significance of human actions by denying individual agency. This philosophy, best articulated by Hegel and applied by Marx, gave rise to various twentieth-century Communist regimes responsible for much suffering. On the opposite end of the spectrum, Burgos shows that other philosophies articulate an extreme individualism, proclaiming the absolute autonomy of each individual. Figures such as Jean-Paul Sartre and Ayn Rand developed such a radical view of individualism that relational connections become difficult; postmodernity inherited this radically autonomous view, and when applied to language and metanarrative, postmodern philosophy erodes an understanding of humans living together as contingent beings.

Having shown these two extremes, Burgos examines the Catholic response. Following a papal directive, Catholic scholarship in the nineteenth and early twentieth centuries doubled down on the philosophy of Thomas Aquinas as the way to articulate a rational faith in modernity. Burgos explains the dilemma: In developing his philosophical union of Aristotelian philosophy and Catholic faith, Aquinas drew much of his cosmology and metaphysics from Aristotle and Plato. Inasmuch as philosophy is tied to physics, chemistry, and biology, Aquinas’ philosophy was limited by his temporal context. While there is much to admire and gain from Thomism, Burgos contends that contemporary philosophy cannot return to a pre-Scientific Revolution context in terms of metaphysics and cosmology. We need instead a philosophy that blends the truth in Aquinas and the truth in modern science.

Burgos argues that Christianity (and other faith expressions, Judaism in particular) requires a new philosophy that begins from true knowledge and reckons with the existence of distinct human beings. Burgos writes there was an urgency to awake from a “comfortable nap, ” intellectually speaking. The modern recognition of the psyche as subjective for each individual (a “who” which can think of himself as an “I”) is not compatible with Aristotle’s philosophy; the contemporary traditionalist needs a different philosophical foundation for life and action. “Christianity, as an intellectual framework, needed a philosophy, ” Burgos wrote. “What should, or more simply, what could this philosophy be?”

It is this philosophical conundrum, Burgos contends, that personalism solves. Rejecting Aristotle’s definition of man as “a rational animal,” personalism begins with viewing each human as a “person” who subjectively experiences an objective reality. Drawing on developments from Immanuel Kant, Søren Kierkegaard, and Edmund Husserl, Burgos highlights a philosophical dialogue concerned with explaining the human experience and uniqueness. Persons have the ability to dialogue with other persons, and recognize their own infinite value and the infinite value of other persons.

As Burgos explains in the first chapter and demonstrates throughout the book, personalism is complex because it developed organically in response to the horrors unleashed in the first half of the twentieth century. In doing so, personalism resembles the first philosophies of ancient Greece: Plato, Socrates, Aristotle, the early Stoics all dialogued with each other as they developed their intellectual frameworks. Rather than being solely academic, personalists are interested first and foremost in the ethical and political implications of their philosophy.

Here is a philosophy seeking to answer the timeless questions: Who are we, and how ought we live?

If it is true that we are persons, and that each person is an infinitely valuable individual, how ought we to live? How ought society be structured towards individual flourishing within a community? Personalism does not require a theological position, though Burgos shows that (so far) the significant personalists have all been theists. We are persons, because God is a Person; Buber’s dialogue ultimately works, because God dialogues with us. Here is a philosophy seeking to answer the timeless questions: Who are we, and how ought we live?

While much work remains to be done applying the principles of personalism to contemporary life, some applications seem apparent. Rather than envisioning humans as solely rational or economic creatures, a personalist perspective would begin by thinking about humans as bearers of the divine image. A society influenced by personalism would seek to encourage institutions integral to human flourishing: the church, the school, the local association. Such a political outlook does not align with a specific party; some personalists sounded virtually Communist in their emphasis on community, while others resembled libertarians in their focus on individual choices. What binds them together is an overarching principle valuing the human person and his relationships with other persons as crucial for pursuing the common good. If the principles are sound, then the application of personalism could bring positive change to the trajectory of Western civilization.

Personalism has its roots in nineteenth century America; fourth century theology; and postwar academia in France, Spain, Italy, and Poland. It is a diverse philosophical expression rooted in the primacy of the human person. Personalism takes on a variety of unique complications based on which personalist philosopher one reads. Pope John Paul II (then Karol Wojtyla) developed personalism as a foundation for ethics, rooting it in latent Thomism and calling it “Thomistic Personalism.” Martin Buber drew on personalism for his famous I-Thou dialectic. Italian, Spanish, and French strands of personalism all developed across the late twentieth century, with Jacques Maritain and Charles Mounier both standing as giants within personalist discourse.

While this complexity makes personalism difficult to define, Burgos does an admirable job of explaining the nuances of various schools of thought within the movement. He focuses greater effort on what unifies personalism, leaving internal divisions for those who mine his footnotes. This work reflects mature scholarship. While accessible to the educated layman, it also advances the disciplinary discussion of personalism through clarification and definition. This book also avoids the academic formula. To understand this Introduction, one needs to read the whole work. While each chapter stands alone, reading the first and final chapters will not produce as much value as reading the whole.

Burgos spends the first third of An Introduction to Personalism helping the reader understand the philosophical and historical context within which personalism developed; the second portion examines key personalist thinkers organized through national dialogues. Burgos’ rich footnotes reveal a scholar whose lifework consists of deep reading and clear explication. His descriptions of nuanced conversation help the introductory reader understand the discussion without getting lost in the weeds of philosophical jargon.

The final chapter draws together various concepts outlined in the previous chapters to propose a synthesis of personalist thought, forming a coherent philosophy. In his most concise definition, Burgos summarizes personalism as “an attitude or movement of which the strong point is the vindication of the person against his many enemies and the correlative transformation of society in this direction.”

The twenty-first century is off to a rough start in the West. Postmodern philosophy has failed. Rather than delivering a constructive vision of society allowing humans to flourish, postmodern critiques destroy the very foundations of human life. Perhaps personalism is the answer to postmodernism’s failures, allowing the traditionalist to recognize the capacities of the individual within his community and reject the extremes of communal or radical autonomous philosophy. Personalism still needs much work: It requires systematization for clarity, specificity in application, greater appreciation of the dignity conferred by individual choice, and extension beyond the Catholic intellectual world. Juan Manuel Burgos has a done an admirable job bringing the personalist conversation to a wider audience, and in that he shows the importance of careful scholarship for human flourishing.