For the first time, we can now mechanically simulate the cognitive process. –Sister Mary Kenneth Keller 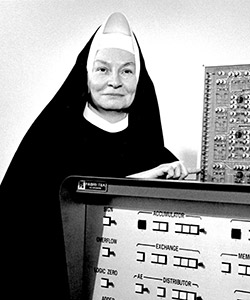 Relatively little information is known about Keller’s early life. She was born on December 17, 1913, to John Adam Keller and Catherine Josephine (née Sullivan) in Cleveland, Ohio. In 1932, she followed God’s call to the Sisters of Charity of the Blessed Virgin Mary in Dubuque, Iowa, and in 1940 took her vows with the congregation. She then began her academic career in Chicago, completing both a B.S. in math and an M.S. in math and physics from DePaul University in 1943 and 1953, respectively.

In 1958, Keller started at the National Science Foundation workshop in the computer science center at Dartmouth College, which was an all-male school at the time. While there she teamed up with computer scientists John G. Kemeny and Thomas E. Kurtz to develop the BASIC programming language.

BASIC revolutionized computer programming by allowing anyone who could learn the language to write custom software. Before BASIC, only mathematicians and scientists could do so. Versions of BASIC became widespread on the first personal computers in the 1970s and 1980s, allowing everyone from business owners to computer hobbyists to develop software.

Throughout her graduate studies Keller was associated with several other prestigious institutions in addition to Dartmouth, including the University of Michigan and Purdue. Keller eventually earned her Ph.D. in computer science from the University of Wisconsin– Madison in 1965. Her thesis was titled “Inductive Inference on Computer Generated Patterns.”

Keller went on to establish the computer science department at Clarke College, a Catholic college for women founded by the Sisters of Charity of the Blessed Virgin Mary. She chaired the department for 20 years, where she was an advocate for women in computer science. She was noted for her support of working mothers and even encouraged mothers to bring their babies to class with them.

Keller was one of the first to recognize and acknowledge the future extensive role computers would have in the world. In 1964, she noted that students in fields such as psychology and the sciences were already finding computers to be useful in their academic work. She advocated for the use of computers in education and established a master’s degree program for computer applications in education at Clarke. She also predicted the significance computers would have in libraries, saying, “Its function in information retrieval will make it the hub of tomorrow’s libraries.”

Keller was enthusiastic about providing access to computers to everyone, not only computer scientists. “We’re having an information explosion, among others”, she said, “and it’s certainly obvious that information is of no use unless it’s available.”