Book Review of The Complacent Class: The Self-Defeating Quest for the American Dream (St. Martin's Press 2017). 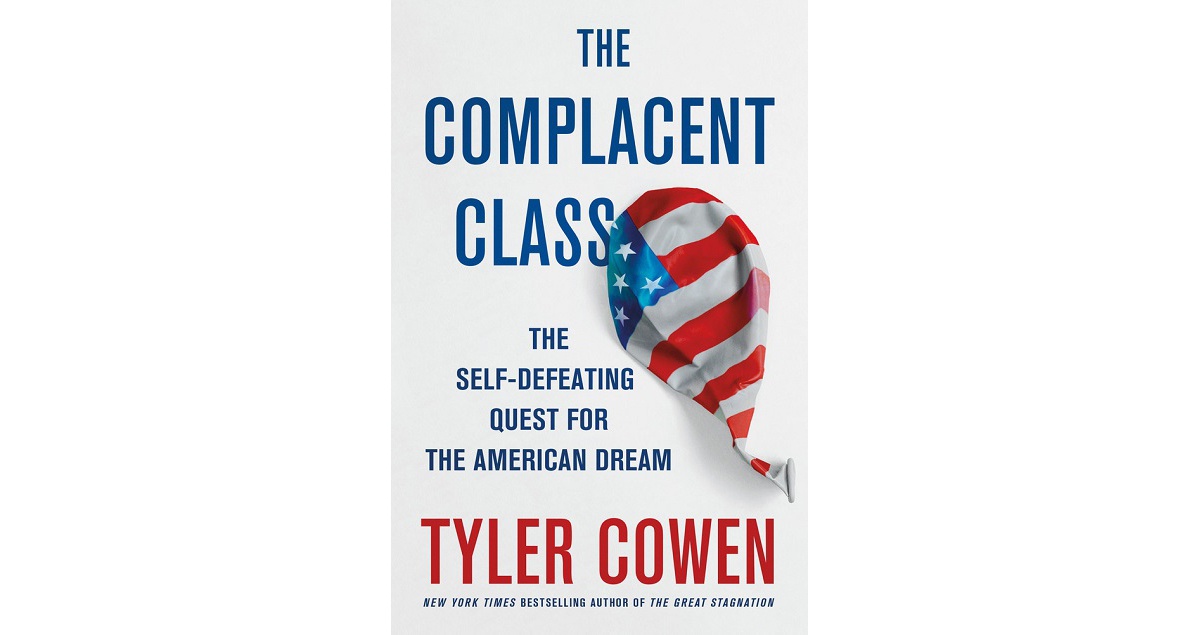 Tyler Cowen addresses the economic and social harms that arise from, as he says in The Complacent Class: The Self-Defeating Quest for the American Dream, “decisions that are at first glance” in our “best interests.” As our decisions play out, they can prove to have consequences “at the societal level” that, while “unintended,” are “not always good.”

Technological advances have created a “new culture of matching” that has improved the quality of life for many of us. At the same time, our ability to get exactly, or almost exactly, what we want also allows us to avoid the disappointments and dissatisfactions that inspired people to pursue the innovations that make matching possible. Paradoxically, getting what we want when we want it has “made us more risk averse and more set in our ways.” Our success threatens our success.

Socially, the matching culture is “more segregated” by education, economic status and especially race. This isn’t, as he stresses throughout the book, necessarily intentional. But while racial intolerance has diminished, racial segregation is becoming the norm in those areas of the country that are booming economically. Cowen says this happens because “the rich and well educated are keener to live together, in tight bunches and groups, than are the less well educated.” The irony in this is that “it’s these groups—the wealthy, the well-educated, and the creative class—who often complain about inequality and American segregation with the greatest fervor.”

Moreover, when we look past words to deeds, we see that as the “self-selection process” runs its course, “no matter how ostensibly progressive their politics,” the “affluent and well educated in America” who live in large urban areas or centers of technological innovation “may be especially out of touch” with most Americans. Living in their comfortable bubble, the most successful among us don’t understand how, for all their good intentions, they have helped create a divided society where racial segregation and income inequality are becoming more common.

Nevertheless, Cowen sees technology and the matching culture as fundamentally good things. Like many of us, he uses Spotify and Pandora to find music he likes. Software to match “college roommates” or “executives and employees” are socially and economically beneficial. “The bright side” of all this is that matching technologies can make possible “encounters with people who truly have different outlooks than we do and who can communicate that to us online or later maybe even in a personal meeting.”

But wealth production, technological innovation and a free society share a common foundation in human and Christian virtue. Forgetting this, as Cowen’s book illustrates, makes us vulnerable to the dark side in matching culture.

We are experiencing “a fundamental shift of societal energy away from building a new and freer world and toward rearranging the pieces in the world we already have.” For Cowen, “There was something to be said for less-compatible, more challenge-laden accidental pairings with all their conflicts and messy resolutions.” Discomfort, dissatisfaction and disappointment—whether acute, chronic, moral, social or economic—can spur the kind of innovations that have made the free market so successful in creating and distributing wealth.

In Cowen’s view, discomfort is also what fosters flexibility, compromise and other “error correction mechanisms” that are at the heart of a free society. On this he approvingly quotes Churchill: “You can always count on Americans to do the right thing—after they’ve tried everything else.” Our comfortable way of life has robbed us of the irritation that motivates us to try new things. Complacency has “sapped us of the pioneer spirit that made America the world’s most productive and innovative economy. Furthermore, all this has happened at a time when we may need American dynamism more than ever before.”

Reading The Complacent Class reminded me of the parable of the rich fool (Luke 12:16-21). In his commentary, St. Cyril of Alexandria asks, “What does the rich man do, surrounded by a great supply of many blessings beyond number?” Wealthy though the man is, “He speaks words of poverty.” The man is gripped by “distress and anxiety” because he has not “raise[d] his eyes to God” and does not “cherish love for the poor or desire the esteem it gains.”

Instead of charitable self-sacrifice, the rich fool pursues a life of self-satisfaction in which he, not God, will determine “the length of his life, as if he would also reap this from the ground” as he does wheat (Commentary of Luke, Homily 89). “And I will say to my soul, ‘Soul, you have many goods laid up for many years; take your ease; eat, drink, and be merry.’ (Luke 12:19 NKJV)."

In a word, the rich fool is complacent.

Resisting complacency doesn’t mean forgoing productivity or planning for the future. In Proverbs, for example, we are told, “Go to the ant, you sluggard! Consider her ways and be wise” (6:6 NKJV). To be wise means, among other things, being productive and governing our lives without need of “captain, overseer or ruler” to compel us to plant crops “in the summer” and to gather “food in the harvest” (6:7-8 NKJV) come autumn.

Like the rich fool, Cowen’s America is in the grip of that gentle and pleasurable idleness about which Solomon warns us:

A little sleep, a little slumber,

A little folding of the hands to sleep—

So shall your poverty come on you like a prowler,

Whatever its short-term attractions, a preference for complacency means in the longterm that more and more Americans will slide back into the material poverty and tribalism that characterized humanity before the rise of the market economy.

In the last chapter, Cowen implicitly acknowledges the close connection between complacency and a culture of moral and social decay. He lays out for the reader several possible scenarios for America’s eventual “return of chaos” as the complacent class losses its hold on the culture. Though only time will tell, I suspect he is right when he says the “current system is in some ways broken and that the complacent class, for all its good intentions, has in some ways failed America.”

Whether this breakdown results in future innovation and economic growth or simply more chaos remains to be seen since. Though it may appear otherwise, the free market is fragile. Economic growth, technological innovation and a free society all depend on our willingness to endure and even pursue a relative degree of discomfort.

In other words, we must remember that the benefits of a free economy are not guaranteed; they depend on our personal and cultural willingness to cultivate virtue. As Cowen’s work suggests, the crisis we face now is that our success has made us indifferent, and at times even hostile, to the moral foundation that makes success possible.

Fr Gregory Jensen is the pastor of Sts. Cyril & Methodius Ukrainian Orthodox Mission and the Eastern Orthodox chaplain at the University of Wisconsin-Madison. He has published articles in psychology, theology, and economics and is the author of The Cure for Consumerism. He is also an instructor in youth ministry at St Sophia Ukrainian Orthodox Seminary, Bound Brook, NJ.  In 2013, he was a Lone Mountain Fellow with the Bozeman, Montana-based Property and Environmental Research Center (PERC).