The Swedish establishment is emotionally invested in presenting Sweden as a successful, socially liberal, post-national utopia. As this image becomes harder to maintain, the establishment needs not only to confront citizens’ actual problems but it must also, more importantly, deal with the issue of who they are. If your Swedish identity depends on being part of a national utopian project, who are you when utopia unravels? This is the background to Kajsa Norman’s book Sweden’s Dark Soul. 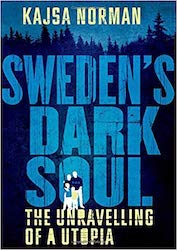 Norman starts the book depicting hundreds of sexual violations of girls in their teens, and younger, during the “We Are Stockholm” festival in the summer of 2015. Despite hundreds of witnesses and police reports, the media did not report on the crimes committed at the festival, which was funded by the local government and took place only a few hundred yards from parliament and the royal castle. Norman interviews a psychologist who saw girls harassed and violated by groups of men. She describes how eyewitness tried, and failed, to persuade Sweden's largest daily to cover the matter.

The newspaper, Dagens Nyheter, has refused to acknowledge its decision not to publish this story was due to the fact that all the perpetrators were non-Swedish, but Norman makes a convincing case that this was the reason. She here puts her finger on a sore spot in a country that commends itself for being progressive on gender equality: Swedish feminists go into total paralysis when women's rights collide with immigration.

Norman’s use of biographies as a literary tool skillfully weaves thought-provoking portrayals into the book’s overarching historical context. In the later chapters, Norman usefully contrasts two people: the Swedish journalist Chang Frick and the Armenian immigrant Samvel. She suggests that only a Chang Frick, a natural outsider because of his Roma background, could possess the courage to reveal the truth about the festival in his online newspaper, Nyheter Idag. And she shows why it takes courage to speak the truth in a country with the world’s oldest free press, describing how the mainstream media tried to defend the unraveling utopian consensus by discrediting Chang Frick with accusations of peddling “fake news.”

If your Swedish identity depends on being part of a national utopian project, who are you when utopia unravels?

The story of Armenian immigrant Samvel, an albino called “the Dane” during childhood in Yerevan, is the second one told in the book. Norman touchingly describes one man’s strong yearning to assimilate and acquire a thoroughly Swedish identity. She contrasts this desire with the lukewarm response of the country’s officials, who replaced the policy of assimilation with multiculturalism in 1975.

Sweden is also one of the most radically secular nations in the world, despite only having just recently disestablished the Church of Sweden as the state church. Historically, the religious culture of European nations provided a common rhythm of life and a basis for social cohesion. But the Swedish establishment is attempting to replace this conception with its own utopian ideals. Norman’s book has made clear that this effort to create artificial commonality has been unsuccessful. The book gives a deeper understanding of why the political establishment and Swedish officials acts as they do when their most vulnerable citizens are victimized.

The narrative of the book comes to life in a particularly surreal manner when Norman admits that she probably would not have dared to write the book if she lived in Sweden and had to depend on Swedish society for her livelihood. To date, her book has not been able to find a Swedish publisher, despite receiving good reviews in the British media and the first edition selling out. The author was not overly surprised. She did, after all, write the book in English hoping for it to be translated into Swedish, not the other way around.

Kajsa Norman is a Swedish expatriate who always found her homeland “too boring” for a book. Her previously books were on the opposition in Venezuela and the Afrikaner minority in South Africa. Sadly, Sweden has become sufficiently exciting to merit a book – and her book deserves our attention.

A slightly shorter version of this review was published in The Conservative #1, 2019.