Aquinas and the Market: Toward A Humane Economy is a pleasant surprise, because it takes both economics and theology very seriously. There are probably not many scholars who have doctorates in economics (Harvard) and theology (Notre Dame) and even fewer who can write an academic book that is almost entirely free of academic jargon. It is readable without oversimplifying the subject matter. Sensible and profound at the same time, Mary Hirschfeld’s work may be in a class of its own. 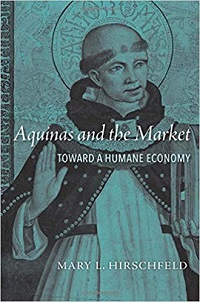 Even more surprising is that she began her career interested in feminist economics, admits to having learned “the wisdom of conservative and libertarian thought even though [she] never fully embraced it,” and eventually converted to Roman Catholicism. Her dissertation director at Notre Dame, Jean Porter, steered her away from “pure theology” and towards theological, specifically Thomistic, economics.

Most theologians and philosophers tend to look down upon economics, but not Hirschfeld. She attempts to create a dialogue between theology and economics, something many religious leaders say is necessary but are themselves incapable of doing. How many of them would be able to see the economic downsides of rent control and the minimum wage as Hirschfeld does? The trick is in taking into account the objective reality of God and the subjective preferences of human beings expressed in the everyday operations of the marketplace.

Hirschfeld’s interest in feminist economics and especially theories of household consumption may have helped her bridge this divide. It is somewhat of an intellectual mystery how the ancient and medieval study of household management become the dominant, mathematical-laden social science of the modern age. While Christian concern for the human person and individual conscience had much to do with it, it is not a sufficient explanation.

If there is one shortcoming of this work, it is a neglect of the mediating ground between theology and economics, i.e. politics. Neither religion nor business is a completely private or individual affair; each takes place within a social context that at least implicitly aims towards some sort of common good. Hirschfeld is well aware of the need for a hierarchical ordering of goods in any kind of Thomistic economics. It seems unlikely that such an ordering can take place without some kind of authority behind it. Who this authority would be and how it would govern are matters of politics rather than economics.

While theologians such as Thomas emphasized the need for order, modern political philosophers such as Machiavelli, Hobbes, and Locke blamed them for its opposite and failing to deliver earthly peace and prosperity. Adam Smith described feudalism harshly in order to promote what he called the commercial society based on some combination of self-interest and sympathy. The Reformation and Counter-Reformation led to religious-political conflicts that eventually created the conditions for modern pluralism and tolerance.

Absent political mediation, the theological order of Thomas cannot coexist with the spontaneous order of the marketplace. Liberal democracy offers such one such form of mediation but, as our contemporary populist movements reveal, functions in an increasingly unsatisfactory way. As an economist, Hirschfeld knows the problems of command-and-control economies; as a feminist, she is a proponent of liberty and equality. One may ask if she does not also harbour a certain longing for a more aristocratic society that would be in tension with her liberal democratic preferences.

Like all modern rationalists, the economist tends to aim for mathematical precision precisely because theology and philosophy are so disputatious and politically utopian; the economist favours the practical over the theoretical. Modern economics has done much to raise material living standards all over the world, failing only where it has not yet been implemented. Such progress is real and ought to be celebrated, as Hirschfeld does.

Economists, however, cannot avoid theorizing in order to be able to predict human behaviour and influence public policy. They start to create “rational choice” models that are as abstract as those developed by the Scholastics, minus the metaphysics. These models neglect virtue ethics as unrealistic if not hypocritical, never asking if some good did not come from at least pretending to be good. We are materially well-off but spiritually destitute. The result is what Leo Strauss called retail sanity and wholesale madness.

Hirschfeld the economist is aware of the costs as well as the benefits of modernity. Her theological training has given her the language and concepts to address these concerns. A convert’s faith makes her realistic about what may be possible here on earth and what is not. It is very rare to see such common sense and deep learning in one place.

This article originally appeared on the website of The Centre for Enterprise, Markets, and Ethics and is reprinted with permission.

Kishore Jayabalan is director of Istituto Acton, the Acton Institute's Rome office. Formerly, he worked for the Vatican's Pontifical Council for Justice and Peace as an analyst for environmental and disarmament issues and desk officer for English-speaking countries. Kishore Jayabalan earned a B.A. in political science and economics from the University of Michigan, Ann Arbor. In college, he was executive editor of The Michigan Review and an economic policy intern for the U.S. Chamber of Commerce. He worked as an international economist for the Bureau of Labor Statistics in Washington, D.C.