God and the Evil of Scarcity: Moral Foundations of Economic Scarcity was written in 2005, but its central question is timeless: Why would an omnipotent and benevolent God permit evil? Theologians and philosophers have long struggled to explain why God would permit the suffering of innocents or natural disasters. Most conclude that God permits evil so some greater good may come forth. Ultimately, however, it is the belief that such a God exists and that He knows what is best for us which settles the argument. “Where were you when I laid the earth’s foundation?” is the beginning of God’s answer to Job (38:4).

Stronger faith and trust in God’s goodness is a pious response to the problem of evil, one that is perhaps most applicable to overwhelming evils such as those that afflicted Job. But what about those “lesser” evils, where the good God seeks involves human action of the mundane, economic sort? Could it be that we are too fatalistic in the face of evil, cursing the stars when the fault is in ourselves? On the other hand, those who think they can “solve” the problem of evil may come to see themselves as gods, the self-creating masters of their own existence rather than humble servants of God. 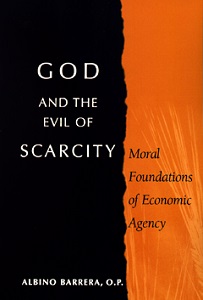 Albino Barrera is a theologian as well as an economist. He grapples with the problem of material scarcity as a “participative theodicy,” as opposed to a Malthusian one. Malthus (wrongly) predicted that population growth would outstrip the supply of the earth’s resources, leading to widespread penury and death. Barrera sees scarcity as an opportunity for human beings to partake in God’s goodness by learning through economics how to allocate scarce resources with alternative uses and sharing the resulting wealth for the common good of all, especially the less fortunate.

Actually, for Barrera, fortune has little to do with it. Material poverty is a moral evil that God wants us to eradicate through the redistribution and transfers of wealth to the poor. God commands that we care for the poor. Since we now have the means to lift people out of poverty, any shortcomings must be someone’s fault. (Presumably, the greedy rich are to blame, rather than certain policies that may keep their poor destitute.)  Barrera’s economics is moralistic, in contrast with the technical studies of mainstream economics today. It is, therefore, part of an older tradition than modern social sciences which refuse to make “value judgments” about how human beings should live.

God gave us the material world to thrive and flourish together. Contra Malthus, Paul Ehrlich and other population control advocates, human beings are more than mouths to feed; they also have minds that can think and hands that can build, as well as hearts that feel pity for the poor. God does not simply give us what we need without our own effort and striving; faith and works complement each other. Barrera makes a strong case of the Catholic work ethic and the spirit of capitalism.

The bulk of this book, however, deals with metaphysics, not economics. The appendices contain extensive discussions of the three types of causation (formal, efficient, and final) to explain how God can exercise providence, govern, and still leave human beings free to act in accordance with His will. Human activity takes place within a twofold order (the whole and its parts) of the universe. These are philosophically dense but necessary treatments if one desires to bring the worlds of theology and economics together.

Yet between theology and economics, there is a yawning gap. Politics, the question of who should rule, determines the types of communities we have, how we promote the common good and much more. Law and history shape how we divide our public responsibilities. Who, for instance, will protect property rights and enforce contracts that make the creation of wealth possible? Who will ensure that wealth is not only produced but also adequately distributed? In addition, who will decide when goods such as national defense or social cohesion, to say nothing of religious observances, take precedence over material prosperity?

Barrera’s treatment of politics, law and history focuses on the Bible, especially the Old Testament. The covenantal politics of Israel offers many insights into its persistent disobedience and ingratitude towards God, as well as His unbounded mercy and love for His chosen people. The political drama of the New Testament is less evident, but vexing issues of Church and State are still with us. Jesus repeatedly denies to rule as an earthly king, despite the subsequent attempts of Christians to rule in His name. There have been many different forms of Christian rule, i.e., monarchic, aristocratic, and democratic, through the ages. It is hard to believe that they shared the same metaphysical principles of economics, irrespective of their political arrangements.

It is unfortunate that Barrera does not engage with thinkers other than Malthus, who explicitly denied divine providence and turned out to be mistaken about economics, as well. John Locke would have been a much worthier adversary, since he formulated a theological-political economy in the Two Treatises of Government, yet he only receives two brief mentions in the book. Adam Smith similarly receives short shrift, with just one citation. Both were much more influential in prescribing the transformation from feudal to commercial societies, likely contributing to the decline of metaphysics among the moderns.

It is unfair to criticize Barrera for the book he chose not to write, so let me conclude by recommending this important work to anyone seeking a deeper foundation to economics than self-interest or the profit motive. As an academic work, it is primarily intended for those who have had some exposure to, and some taste for, metaphysics and, therefore, not for the average entrepreneur and businessperson. It will serve its purpose if it helps high-minded theologians and philosophers understand the importance of economics in doing God’s will.

This article was originally published by The Centre for Enterprise, Markets and Ethics and is reprinted with permission.

(Photo credit: Ted. This photo has been cropped and modified for size. CC BY-SA 2.0.)

Kishore Jayabalan is director of Istituto Acton, the Acton Institute's Rome office. Formerly, he worked for the Vatican's Pontifical Council for Justice and Peace as an analyst for environmental and disarmament issues and desk officer for English-speaking countries. Kishore Jayabalan earned a B.A. in political science and economics from the University of Michigan, Ann Arbor. In college, he was executive editor of The Michigan Review and an economic policy intern for the U.S. Chamber of Commerce. He worked as an international economist for the Bureau of Labor Statistics in Washington, D.C.