The central question political scientist Mark R. Royce addresses in his book, The Political Theology of European Integration: Comparing the Influence of Religious Histories on European Policies, is whether the process of European integration as it has developed since the Second World War, and continues to develop as a result of issues such as Brexit, is also influenced by political theological considerations. He defines “political theology” as “the authoritative application of sacred ideas to public policies and discourses” (p. 1). In the context of Royce’s study, which focuses on 17 Western European countries, in particular Roman Catholicism and the Lutheran, Calvinist, and Anglican forms of Protestantism are relevant. 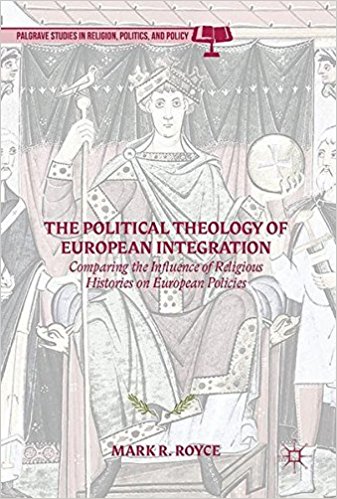 At the beginning of his research, Royce expected countries of a Roman Catholic political theology to be more open towards European integration – a common economic area and an “ever-closer union” politically – than countries of a Protestant political theology. Roman Catholicism, after all, represents “the Church that dominated the late Classical and medieval eras,” whereas Protestantism “helped give birth to new Westphalian regimes” (p. 3). While similar research has already been performed at the individual and group levels, a comparison at the national level was still missing. In order to fill this gap, moreover, Royce employs a qualitative analysis, whereas most previous research relied on statistical measurement.

Although Royce’s hypothesis seems plausible intuitively, the surprising thing is that theological factors are largely missing in previous attempts to conceptualize and explain the process of European integration. Emphasizing material incentives instead, this body of literature appears indebted to the well-known secularization thesis as developed by sociologists. In contrast, Royce is refreshingly open to the role that ideas and norms may have played in a historical process such as European integration.

Interestingly, one important set of ideas which Royce singles out, is that of Christian Democratic political philosophy. In political science, scarce attention has traditionally been paid to Christian Democracy, particularly as compared to Social Democracy. It is only recently that this situation appears to be changing, and American authors such as Royce are paradoxically taking the lead. Thus, the journal Perspectives on Political Science recently also dedicated a symposium to the question whether Christian Democracy could become America’s latest European import.

Royce generally finds his hypothesis confirmed, in the sense that countries of a predominantly Roman Catholic political theology such as Italy, Portugal, and Spain have indeed been more open towards European integration than countries of Protestant political theology like Denmark, Great Britain, Iceland, Norway, and Sweden. Although not labelled by Royce as Roman Catholic countries, France and Germany fit in the same category as Italy, Portugal, and Spain. The explanation he provides for these patterns is that theological ideas as developed in the sixteenth century had an impact on their constitutions in the seventeenth century, which in turn influenced the political positions these countries took with respect to European integration in the twentieth century.

No proof but much evidence

Although at first sight the correlations seem striking, Royce is the first to admit that proving the influence of political theology on actual policy positions taken by countries is difficult. As Royce reminds us, proving causality is generally difficult in the social sciences. Therefore, the same difficulty is encountered by authors who focus on other, more material, factors in the process of European integration. It only increases the credibility of Royce’s study that he made this caveat explicit.

Still, the outcomes of the study challenge some of the basic assumptions on which so many other studies are based, particularly in so far as these often simply take the secular character of European law and governance to be self-evident. Rather than aiming to prove the opposite to be the case, Royce wishes to stimulate conversations and debate about the political theological foundations which characterize the EU as well. This type of reflection is indeed badly needed, and long overdue.

Thus, such an approach could helpfully widen the debate regarding Brexit. Obviously, this does not mean that economic, strategic, and similar considerations do not play a role in the position the UK is currently taking with respect to the EU. Yet, more awareness of the deeper issues which are consciously or unconsciously involved, might well make it easier to reimagine Europe, both within and outside the UK. The same applies to the German position, which as little as 10 years ago appears to have been strongly principled, given for example the manifesto of the CDU at that time. It would be surprising if this had suddenly changed.

How will ebbing faith affect the European project?

First, the exclusion of Central and Eastern European countries from the study weakens its relevance in relation to the current EU. According to the author, it is questionable whether Eastern Orthodoxy has similar views with respect to, e.g., representative democracy as Roman Catholicism and Protestantism. This may make it defensible to leave Eastern Orthodoxy out of consideration in this study, as does the fact that the countries concerned have only been able to make independent policy choices regarding Europe relatively recently. Yet, fundamental differences in outlook among its member states are a reality that Europe now has to deal with. Moreover, engaging Eastern Orthodoxy in prospective studies of the process of European integration might well point out the relevance of political theological considerations even further.

Secondly, although the author rightly points to the importance of the past in determining the impact of political theological factors, his approach at times runs the risk of becoming a little deterministic. To be sure, it can be explained historically why countries of a Roman Catholic political theology will be more open towards European integration than countries of a Protestant political theology. However, these political theologies are not static and can therefore change over time. Thus, it is likely that current German Chancellor Angela Merkel has drawn inspiration for her principled pro-European stance precisely from her Protestant faith. Also, the Church of England has generally not been in favor of Brexit, although after the referendum it has pointed to the societal risks of continued debate on this divisive topic.

Third, and finally, perhaps the most pertinent question which the study raises, is not formulated by Royce until the very end of his book. That question is whether the process of European integration will actually be able to continue with such little attention being paid to its theological foundations. It is one thing to conclude that countries of a Roman Catholic political theology are generally more open towards European integration than countries of a Protestant political theology. But he openly asks whether the process of European integration might well come to a halt altogether as the influence of both Roman Catholic and Protestant public theologies in present-day Europe continues to decline. The author wishes his research to remain “value-neutral” (p. 294), as is the custom among political scientists, and therefore remains agnostic regarding the answer to the question. Still, it is clear from the final sentences of this worthwhile book that Royce would not be surprised if the proudly secular EU soon learned the hard way that theology matters after all.

(Photo credit: Thomas Quine. This photo has been cropped and modified for size. CC BY 2.0.)

Hans-Martien ten Napel is an Associate Professor of Constitutional and Administrative Law at Leiden University in the Netherlands and a Research Fellow of the Leiden Law School. He was a Post-Doctoral Fellow at the Minda de Gunzburg Center for European Studies at Harvard University and was a Research Fellow in Legal Studies at the Center of Theological Inquiry (CTI) in Princeton, NJ. He is a member of the editorial board of the Tijdschrift voor Religie, Recht en Beleid (Journal for Religion, Law and Policy). His latest book, titled Constitutionalism, Democracy and Religious Freedom (Routledge), was published in 2017.