“Conservation will ultimately boil down to rewarding the private landowner who conserves the public interest.” Aldo Leopold, in “The River of the Mother of God.”

In December, several dozen people gathered for conversation and drinks in Bozeman, Montana, to discuss a long-simmering controversy over urban growth in this incredibly scenic corner of the American West. The event, which drew mostly younger men and women with a penchant for community engagement, was hosted by the Gallatin Valley Land Trust, an organization that is working to conserve land from rapid development in and around this city of 45,000 people an hour’s drive from Yellowstone National Park.

“There’s a worry that people would just come for the jobs and not be invested in the community,” says Penelope Pierce, executive director of the organization. “I always marvel at how smart and curious and engaged they are.”

At the meeting, Pierce heard good things about what comes with economic growth: more cultural choices, a better restaurant scene, greater ethnic diversity and not least, more jobs and better wages. But there are also misgivings about what growth is doing to housing affordability, urban sprawl and a lack of planning. Against this, there are tensions about the “close the door behind you” sentiment of residents to newcomers.

How Bozeman resolves these tensions – or fails to resolve them – may indicate something about the strength of anti-sprawl movements, with their one-size-fits-all regulations on housing and land use, against free-market approaches that affirm property rights and neighborhood input. And how it plays out has national import as more and more Americans migrate to growing communities in the South and West.

Bozeman, and surrounding communities in the Gallatin Valley, are “magnets for people with high human capital,” says John Baden, a long time Montana rancher and chairman of the Foundation for Research on Economics & the Environment, a free-market organization in Bozeman. The city is the sort of place that draws people with high educational attainments and wealth because they choose to live near great natural beauty but also have access to cultural pursuits. Bozeman is a lifestyle choice for many.

Montana, perhaps the most remote state in the lower 48, with developed land comprising less than 2 percent of its vast territory, has always been attractive for recreation and scenic beauty. But that remoteness – and its harsh winters – was offputting to many. Now, with high-speed internet and better air links, that’s not such a deterrent. “Technology has reduced the cost of distance by a huge amount,” Baden says.

The rate of growth is what’s driving much of the anxiety. From 2000 to 2015, Montanans’ total personal income grew by 49 percent, according to an analysis by Headwaters Economics in Bozeman. But the job and income growth haven’t by and large been driven by the sectors that built the West – ranching, mining, lumber and related activities. Some 85 percent of the growth, according to Headwaters, has come from service sector industries, such as health care, outdoor recreation, real estate and tech.

The western half of Montana has grown the fastest, with five counties racking up more than three fourths of job growth: Gallatin (Bozeman), Lewis, Flathead, Missoula and Yellowstone. Overall, counties with a higher share of federal lands (read: wildlife and recreation) tend to outperform counties with less federal land. An estimated 31 percent of Montana is under management by federal agencies.

What’s happening in Bozeman is consistent with long-term trends in migration between states, with millions of people continuing to cross state lines for new places to live – mostly in the South and West. From 2010 to 2017, nationally the number was 4.3 million, according to a new analysis by Wendell Cox, published by the Center for Opportunity Urbanism in Houston. In the West, some of the biggest magnets are Montana, Idaho, Nevada and Utah.

One typical response to rapid urban growth in recent decades is the passage of anti-sprawl or growth-control laws by local communities. These use a variety of regulatory approaches, including setting boundaries for development, promoting housing density versus single family homes and putting the brakes on road expansion to discourage light vehicle traffic. If you see your city streets suddenly constricted with bike lanes, pedestrian walkways and ditchlike “bioretension islands” in medians, you’re being prodded by planners to take the bus.

Nearly 20 years ago, a group of academics and free-market think tank fellows gathered on a ranch near Big Sky, Montana, just outside Bozeman, and issued a set of principles to counter the dozens of anti-sprawl regulations that had been passed in the 1990s. The most fundamental principle the group promulgated in the Lone Mountain Compact was that “absent a material threat to other individuals or the community,” people should be allowed to live and work where and how they like. “Prescriptive, centralized plans that attempt to determine the detailed outcome of community form and function should be avoided,” the Compact declared. “Such ‘comprehensive’ plans interfere with the dynamic, adaptive and evolutionary nature of neighborhoods and cities.”

“One of the twists about Bozeman and other areas of the West is that there are vast tracts of open land. This is irresistible to real estate developers who see the migration patterns of wealthy boomers ...”

One of the twists about Bozeman and other areas of the West is that there are vast tracts of open land. This is irresistible to real estate developers who see the migration patterns of wealthy boomers looking for a postcard-perfect setting for a log cabin mansion. But in the West, there are often overlapping jurisdictions for public land management and competing interests in the private sector that make any coherent approach to land use very tricky.

The Greater Yellowstone region is a particularly interesting management problem because of the multiple legal jurisdictions that come into play. This includes two national parks, seven national forests, twenty two counties across three states and multiple other assorted entities, including a good deal of high-value private land.

One unique aspect is the vast store of research and scientific inquiry that Yellowstone and the surrounding region has built up over decades, says Jerry D. Johnson, a professor in the political science department at Montana State University in Bozeman, and an expert on the political economy of public lands and national park management.

“Within this context we have tried political leaders of all types and experimented with various policies, such as local option sales tax, local option zoning, affordable housing, conservation easements and the like,” he says. “The glaring gap in the region is that no one seems very interested in systematically examining the spectrum of policy to make some evaluation.”

Although there is currently much support among Bozeman residents for “affordable housing” programs, Johnson is not particularly enthusiastic. “My personal feeling is that such programs are largely misplaced, although I get the emotional appeal,” he says. “Better to encourage living in a less desirable location in the hope that those locations will eventually become Bozeman- like through application of social energy and pent-up demand for similar amenities.”

What is needed, he says, are engaged nonprofits that continually press for land conservation and preservation of habitat corridors as well as recognition that growth in the region is driven by “our location and amenities.” Highly focused strategic projects, Johnson says, can protect “high-value spots,” including large ranches, wetlands and winter ranges.

One way to preserve these high-value lands – and respect property rights – is through the work of the Gallatin Valley Land Trust and other groups like it (see accompanying article, “Betting the ranch”). The Montana Association of Land Trusts in Helena estimates that land trusts, public agencies and landowners “have worked to conserve over two million acres of private land since 1976, and the current pace of land conservation continues to be strong in Montana.”

Gallatin Valley Land Trust works with private landowners to protect ranches and other private property for future agricultural, wildlife and recreational use through voluntary conservation easements. Once under the legal protection of a conservation agreement through the trust, the landowner retains ownership and can continue to live on the land. If the property owner sells the land or passes it on to family members, the easement transfers with it “in perpetuity.”

Pierce, the trust’s executive director, says the easements are a “way to balance growth.” These are purely voluntary and have “nothing to do with regulations.” The easements are also a way for landowners to keep ranches and other lands in family ownership without breaking up property and selling piecemeal holdings to cover estate taxes. 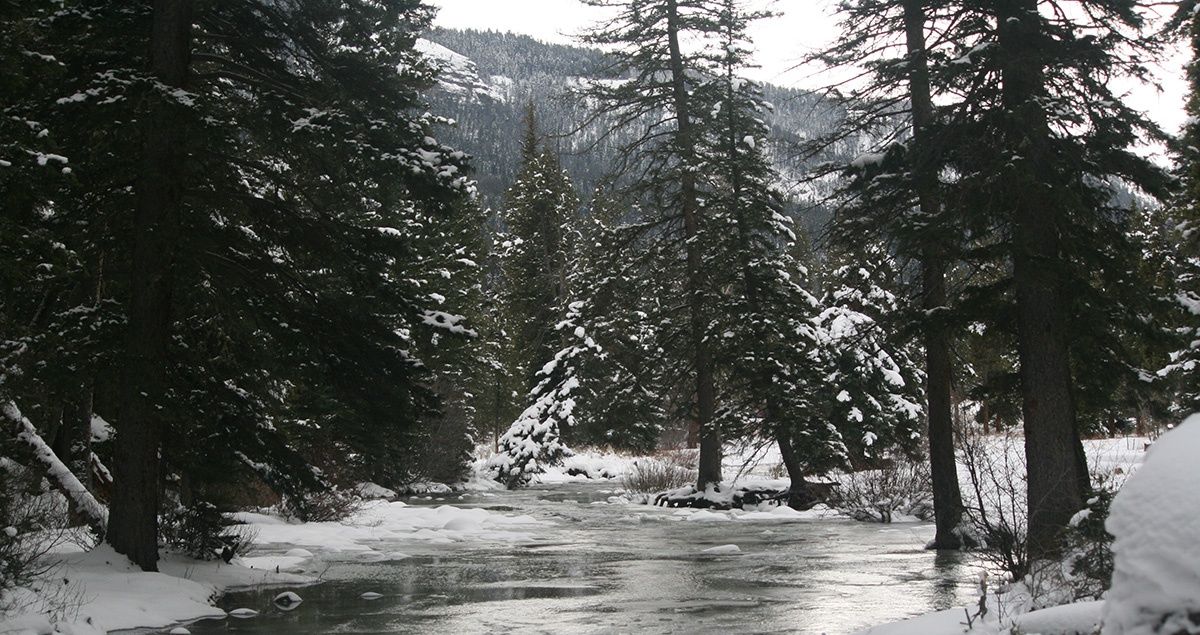 That generational view is important for many who view conservation in a religious context. In a 2013 Acton Institute commentary on Christians and property rights, Rev. Gregory Jensen says “it is through the wise and prudent use of our property that we are able to give ourselves over in love to the next generation and so give them the possibility of likewise transcending a purely material way of life through an act of self-donation.” Rev. Jensen quotes the Russian philosopher Vladimir Soloviev, who observed that “if it were not for the intentional and voluntary handing down of what has been acquired, we should have only a physical succession of generations, the later repeating the life of the former, as is the case with animals.”

On environmental policy issues, rancher and economist John Baden distinguishes between two main sectors: “sludge” (pollution and policies designed to fix these problems) and “romance lands” (parks, wilderness and wildlife, range, forests and water. The sort of stuff you see on nature calendars). In a commentary he wrote last year, Baden observed that as Americans become “remarkably wealthy,” they also raise their own educational levels and are more aware of environmental issues. Unfortunately, as common as this conservation ethic is, it is “rarely deep.”

“Quite naturally, many people with high human capital are attracted to our romance lands and become its sentinels and monitors,” Baden writes. “The great majority of them support conservation and preservation and none of them arrive to mine, log or dam. Rather, they come to explore, experience and consort in natural settings and with civil people who share their culture.”

The vast majority of American citizens support the conservation of public lands and believe only government ownership will provide it, Baden adds. But he points to the increasing attraction of public private cooperative arrangements by conservationists to protect land and wildlife. These may become more important as federal budgets are stressed by entitlements and funding for parks and other conservation efforts are constrained. He explains it this way:

In the political arena, entitlements trump ecology, welfare beats wildlands. Ultimately, some environmental and conservation groups will explore having some wildlife refuges, forests, parks and monuments become public fiduciary trusts, organizations independent of government management. This evolutionary move would help realize the Progressive Era ideal of protecting our romance lands from the predation of special interests. They relentlessly operate in both the governmental and private sectors. Fiduciary trusts offer well-tested means to protect the treasures of our romance lands.

How Bozeman residents reconcile the preservation of ranch lands and romance lands in the Greater Yellowstone region with the human need for housing, space and economic growth remains to be seen. The choices they make will shape what kind of community they want today, and for generations to come.

John Couretas is a writer and editor based in Grand Rapids, Michigan.