Reason, Faith, and the Struggle for Western Civilization

In his acclaimed book Reason, Faith, and the Struggle for Western Civilization (Regnery Gateway, 2019), Samuel Gregg argues that while reason and faith are often at fierce odds with each one in our contemporary Western culture, they shouldn't be. Going back to the Hebrew Scriptures and tracing the development of ideas through the Enlightenment to our own time, Gregg asserts that Western culture was decisively forged by its particular integration of reason and faith. Many of its contemporary problems, he says, reflect the disintegration of that relationship, grounded in the idea of God-as-Logos.

As Gregg's book illustrates, when reason and faith are separated, they fuel “pathologies” such as scientism, relativism, fundamentalism, sentimental humanitarianism, and ideologies like Marxism which seek to establish heaven on earth. The only way forward, Gregg argues, is for those who believe in truth to restate the integration of reason and faith in ways that draw upon its Jewish, Greek, Roman, and Christian roots but also the insights of modernity and the Enlightenment. 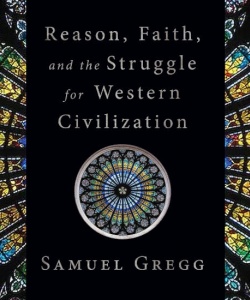 MAIN SPEAKER
Dr. Samuel Gregg is research director at the Acton Institute. He has written and spoken extensively on questions of political economy, economic history, ethics in finance, and natural law theory. He earned his Doctorate of Philosophy in moral philosophy and political economy from the University of Oxford under the direction of the world renowned natural law scholar, John Finnis. Gregg publishes in journals such as the Harvard Journal of Law and Public Policy, Journal for Markets and Morality, and the Journal des Economistes et des Etudes Humaines. He is a regular writer of op-eds for various outlets such as the Wall Street Journal Europe, Washington Times, National Review, Foreign Affairs, and the Jerusalem Post. He has written 12 books, including, Economic Thinking for the Theologically Minded (2001), On Ordered Liberty (2003), The Commercial Society (2007), and For God and Profit: How Banking and Finance Can Serve the Common Good (2016). Gregg is a Fellow of the Royal Historical Society and a Member of the Mont Pèlerin Society and the Royal Economic Society. He is also the current President of the Philadelphia Society.

COMMENTATORS
Prof. Ambrogio Bongiovanni: associate professor at the Pontifical Gregorian University where he teaches courses in missiology, faith and culture, religious fundamentalism, and interfaith dialogue. He holds a doctorate in interreligious dialogue and a post-graduate degree in chemical engineering.

Rabbi Prof. Jeffrey Woolf: professor at the Department of Talmud Studies at Bar-Ilan University, Israel. He specializes in the History of Halakhah, Medieval and Renaissance Jewish History, the Philosophy of Rabbi Joseph B. Soloveitchik, and the inter-action between Judaism, Islam and Christianity.

The Zoom webinar will last 1 hour.

A Zoom seminar link will be sent to your email address Wednesday, 13 May at 4:00 pm CET-Rome. Join on line by 4:45 pm to test your audio/video and connect with friends joining the seminar which starts at 5:00 pm CET-Rome.