Tickling Giants (2017) tells how an Egyptian comedian found a way to fight against and call out abusive leaders using creative nonviolence. 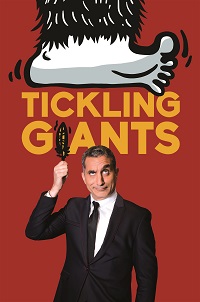 and produced by Sara Taksler follows Dr. Bassem Youssef, the “Jon Stewart of Egypt,” a heart surgeon turned late-night comedian who takes on Egyptian authority. It opens on Tahrir Square in Cairo, where protests have broken out against military control of the government. Youssef and a camera crew walk around talking to the fedup masses. Gunshots constantly go off, some in the distance and some close by.

It’s January 2011, and Hosni Mubarak is still in power. Despite him having ruled Egypt for nearly 30 years without competition, the people are suddenly taking to the streets to demand his removal. This kind of demonstration is practically unheard of in Egyptian culture. The media, who largely support whoever rules Egypt, calls the protestors “insurgents.” This is where Youssef, in a voiceover, explains the two realities that exist in Egypt: the reality on the streets and the “reality” on TV.

The protestors’ work pays off. Mubarak steps down in February 2011. Youssef is thrilled for the new direction of his nation, calling it a “New Egypt.” His optimism is short-lived.

The documentary then focuses on Youssef himself and what led him to become Egypt’s Jon Stewart. Despite success as a heart surgeon, Youssef and a friend began making videos and sharing them online. They used humor to point out the many, many flaws with their government and the media, a model based on Jon Stewart’s The Daily Show. They hoped it would be moderately successful; the first video got 35,000 views on the first day and continued to climb in popularity. This was the first time Egyptians were laughing at or making fun of their leaders. “Hold authority accountable,” Youssef explains of the show. “No matter who’s in charge.” Eventually the videos took off and Yousseff established a real show on TV called Al Bernameg (in English, The Show). Al Bernameg was run entirely by amateurs. It was created by recent grads, architects and lawyers, and, of course, it starred a heart surgeon. One of the writers explains why this type of commentary was so important: “The funniest joke ever is the one told at a funeral.”

Meanwhile, the first true election was held in Egypt and the Muslim Brotherhood’s Mohamed Morsi was elected president of Egypt.

Despite 40 percent of the population watching The Show, Youssef didn’t enjoy universal popularity. A warrant was issued for his arrest and he willingly turned himself in. There was immediate outcry, forcing the authorities to release him. Youssef describes the incident as “what happens when you go after a joker.”

Morsi and the Muslim Brotherhood tried to force Islamic conservatism on the nation, much to the ire of Egyptian General Abdel Fattah el-Sisi, who ousted Morsi in a military coup. The Show continued to attack leaders, gaining and losing diehard fans depending on who was on the receiving end of Youssef’s satire. He described it in 2013 when he accepted anInternational Press Freedom Award from the Committee to Protect Journalists:

For some reason, a joke would piss off a lot of people although the same people were laughing at the same joke before, but it only hurts when the joke is on you. So the same people who defended our freedom a few months ago as I was taken for questioning on accounts of blasphemy, insulting the president and threatening national security are now quite indifferent when I am faced with charges like disturbing the peace, grand treason and, of course, the gift that keeps on giving: threatening national security.

Men and women working on The Show suddenly had family members getting arrested with no official charges. Protests and violence continued. “It’s like 9/11 every day,” Youssef says. Meanwhile, the network that had been so supportive of this revolutionary show no longer wanted to challenge authority. Executives from the network told Youssef that they had to quit mocking the government if they wanted to stay on the air. So The Show found a new network. During a broadcast on the new channel, people had trouble watching it. The signal for the show was lost, yet commercials were broadcast without a problem. Sisi’s people jammed it.

The importance of the work of The Show was soon overshadowed by how dangerous doing that work had become. Its old network sued Youssef for breach of contract, but he lost the case and that became the highest fine ever given. In 2014, he canceled The Show. Between the growing negative sentiment and fearing for his wife and daughter, Youssef made the decision to leave Egypt. Once he was out, the realization set in that he may never go back. He missed his father’s funeral because his brother warned it was too dangerous to return.

The documentary ends with footage of cars and motorcycles driving backward through Cairo. After all the hope from the first democratic election in Egypt, Youssef voices his disgust with the nation he once had so much hope for.

At 113 minutes long, Tickling Giants is not too long of a documentary and shares a very unique perspective on the Arab Spring. Bassem Youssef and The Show demonstrate not only the power of humor in bringing down dangerous regimes but also the need for free speech. The film isn’t rated, but it features strong language, violence and some disturbing imagery. The language alone would certainly warrant an R rating.

Sarah Stanley is the former managing editor of Religion & Liberty.