"A land ethic, then, reflects the existence of an ecological conscience, and this in turn reflects a conviction of individual responsibility for the health of the land.” 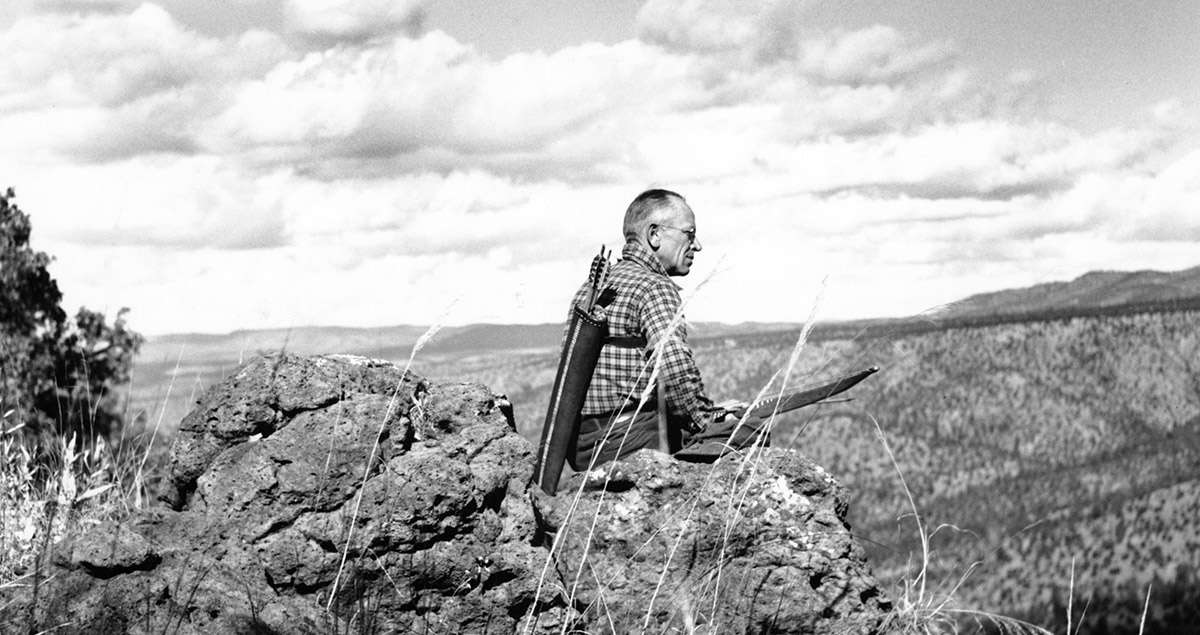 Aldo Leopold was a writer, teacher, conservationist and forester. Considered the father of ecology, he lived what he preached and led the way for longterm, intelligent conservation. Leopold was born in Burlington, Iowa, on January 11, 1887. He spent his youth sketching, observing and writing about the world around him. He continued this interest with a Yale degree in forestry and started his career with the U.S. Forest Service. By 1924 he had moved to Madison, Wisconsin, to study ecology and understand more about conservation; while there he held the chair position in game management at the University of Wisconsin.

In 1935, Leopold and his wife, Estella, acquired an overgrown and abandoned farm in Sauk County near Baraboo, Wisconsin. This land inspired Leopold’s A Sand County Almanac, a collection of essays which were not published until after his death. This property had been over farmed and logged for many decades. Curious whether the land could be restored, Leopold and his family spent time living in “the shack,” a small cabin on the property. The Leopold family began planting trees and restoring the land. Carefully documenting his restorative efforts, Leopold concluded that overused land could indeed be brought back to life with enough care and work.

Leopold fought for conservation but was not impressed by government intervention. He considered it a Band-Aid. He didn’t believe that the government buying up lots of land would work in the long run. “We tried to get conservation by buying land, by subsidizing desirable land changes in land use, and by passing restrictive laws,” Leopold writes. “The last method largely failed; the other two have produced some small samples of success.” He was a vocal supporter of private conservation, understanding that landowners needed a monetary reason to change attitudes toward conservation. “The evolution of a land ethic is an intellectual as well as emotional process,” Leopold explains in A Sand County Almanac. “Conservation is paved with good intentions which prove to be futile, or even dangerous, because they are devoid of critical understanding either of the land, or of the economic land-use.”

After years of work studying and protecting the land, Leopold died of a heart attack on April 21, 1948.

Today, the Leopold Memorial Reserve, 1,500 private acres of land that includes the original farm restored by Leopold and his family, is managed by the Sand Castle Foundation. This foundation is a private, nonprofit organization that began nearly two decades after Leopold’s death. The land is used for experiments in restoration, much like those that Leopold himself conducted. Besides Leopold’s original property, the foundation acquired land through agreements with surrounding landowners. The original landowners retain titles to their land but agree to avoid any action that could harm the natural habitats. They follow various guidelines set by the foundation.

This foundation prides itself on being “the nation’s leading voice for private land conservation.” The foundation’s work echoes that of Leopold’s: “We believe private landowners have the ability to apply conservation on their land in a way that benefits their business and the environment, and that collaboration, not litigation, leads to the most enduring environmental improvements.” The foundation is also dedicated to educating the masses on the importance of land stewardship. It schedules tours, seminars and school visits to the reserve. Leopold’s legacy lives on through the foundation’s work.

Featured image used under Creative Commons license (CC BY 2.0). Some changes made.