Sacred music is not only a devotional exercise composed and performed to honor our Creator but also a bulwark against human sinfulness and frailties. Composer Arvo Pärt has been creating music of faith that inspires while at the same time subverts several of the most oppressive systems of government of the past century.

The composer’s lifelong development as a professional composer also led him to a deeper faith. He converted to Orthodox Christianity in 1972.

Theologian Peter Bouteneff observed that Pärt is frequently connected with the sacred life. “Although the composer’s religious affiliation is specifically Orthodox Christian, his music and its impact carry an appeal beyond confessional and religious boundaries, ” he said. “His popularity crosses over customary distinctions between classical and popular music, sacred and secular art, liturgical space and concert hall.”

Born in Estonia in 1935, Pärt (pronounced PAIRT) emerged as one of the most prominent composers of the past 75 years. His music exhibits deep religious faith that once was brutally suppressed by the state, which was a republic of the Soviet Union from 1940 until independence was declared in 1988.

Pärt learned to play piano on a keyboard that was missing several keys. He was drafted into the Soviet Army where he served as a drummer.

Pärt rose to prominence in Estonian cultural circles in the late 1950s. A student of Heino Eller at the Tallinn Conservatory in his hometown, Pärt established himself first as a composer and recording director for Estonian Radio from 1958 to 1967 and graduated from the conservatory in 1963.

His first orchestral work, “Necrolog”, was completed in 1960. He dedicated this early piece to victims of the Holocaust. “Necrolog” is considered the first Estonian musical composition to reflect the aesthetic theories of Austrian composer and painter Arnold Schoenberg, whose work in atonal music was deemed degenerate by the Third Reich. Not surprisingly, the Union of Soviet Composers denounced the piece as “avant-garde bourgeois music.”

Pärt’s creative restlessness subsequently led him to compose the cantata “Meie aed” (“Our Garden”) and oratorio “Maailma samm” (“Stride of the World”), which won him the 1962 All-Union Young Composers’ Competition. Music journalists have noted the apparent influences of Soviet composers Sergei Prokofiev and Dmitri Shostakovich.

Pärt’s first two symphonies as well as “The Credo for Piano, Orchestra and Chorus” map his interest in creating musical collages of his own work; excerpts from musical pieces by other composers, such as Johannes Sebastian Bach and Peter Tchaikovsky; and improvisations by the orchestra and vocalists wherein the pitch is defined but the specific notes are not. “The Credo” also prompted controversy for including the assertion “I believe in Jesus Christ.”

According to Arthur Lubow in a 2010 New York Times essay on Pärt, the controversy “dried up Part’s official commissions, forcing him to rely on writing film scores to earn a living.” Rather than being deterred, Pärt was invigorated: “It was my deep conviction that the words of Christ — ‘You have heard an eye for an eye, a tooth for a tooth, but I say to you, Do not resist evil, go with love to your enemies’ — this was a theological musical form. Love destroyed the hate. Not destroyed: the hate collapsed itself when it met the love. A convulsion.”

When asked the same year during a radio interview to list those who inspired him, Pärt once again jeopardized his career by responding, “Of course, Christ. Because he solved his fraction perfectly, godly.” According to the New York Times, “The section was edited out of the broadcast version, to avoid a government ban.” 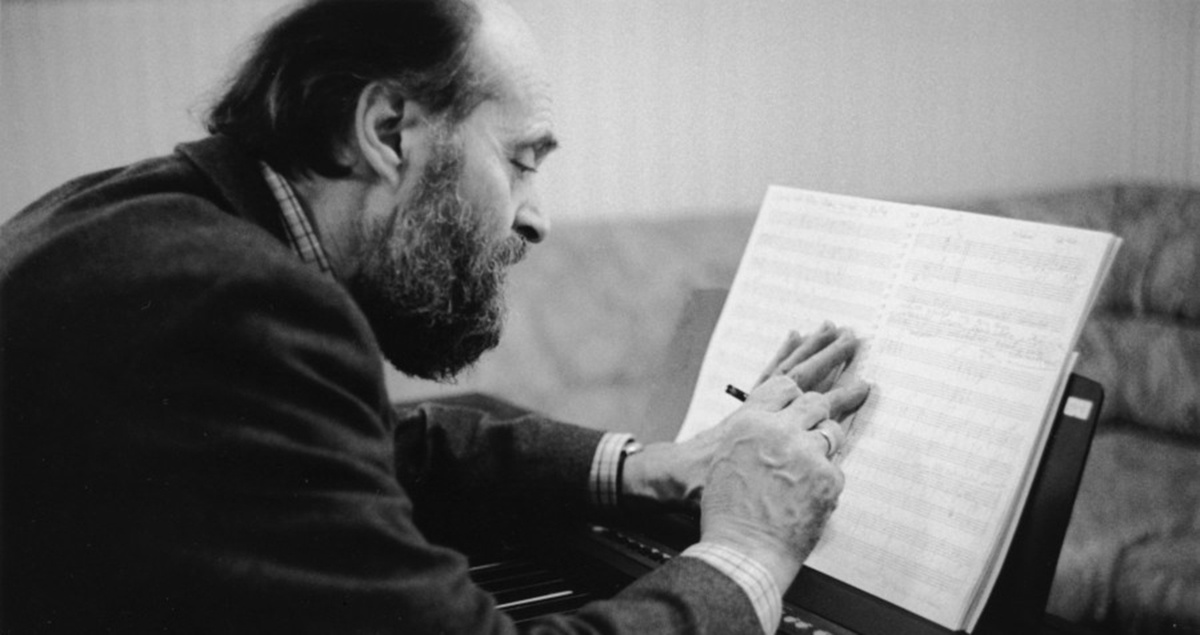 Pärt spent three years studying French and Flemish medieval music after which he composed 1971’s “Symphony No. 3” and 1972’s symphonic cantata “Lied an die Geliebte.” He returned from a four-year sabbatical with a new style he labeled “tintinnabulation” that reflects his study of medieval devotional music.

Tintinnabulation, Pärt explained in an essay on his website, is meant to suggest “bells, the bells’ complex but rich sonorous mass of overtones, the gradual unfolding of patterns.” He explains that he equates the sound of bells with the three notes of a musical triad.

The resulting music emulates Gregorian chants and other forms of medieval religious compositions. “I have discovered that it is enough when a single note is beautifully played , ” he wrote. “This one note, or a silent beat, or a moment of silence comforts me. I work with very few elements – with one voice, with two voices. I build with the most primitive materials – with the triad, with one specific tonality. The three notes of a triad are like bells. And that is why I call it tintinnabulation.”

Similar to the minimalist simplicity of Gregorian chants, Pärt’s tintinnabulation lends his subsequent work a prayerful, meditative quality. Not coincidentally, many compositions by Pärt following his development of tintinnabulation are of a distinctly religious nature.

During his four-year sabbatical, Pärt and his wife led a hardscrabble life until his public reemergence as a composer in 1976. His first composition to gain public attention was “Fur Alina” – a piece written to console a bereft female friend. The friend and her husband had divorced and the couple’s 18-year-old daughter had moved to England with her father.

In 1980, Pärt and his family left Estonia and moved to Berlin. In his New York Times essay, Lubow relates an anecdote about Pärt’s exile:

Emigrating from the Soviet Union to the west in January 1980 with his wife, Nora, and their two small sons, the Estonian composer Arvo Pärt was stopped by border police at the Brest railroad station for a luggage search. “We had only seven suitcases, full of my scores, records and tapes, ” he recalled recently. “They said, ‘Let’s listen.’ It was a big station. No one else was there. We took my record player and played ‘Cantus.’ It was like liturgy. Then they played another record, ‘Missa Syllabica.’ They were so friendly to us. I think it is the first time in the history of the Soviet Union that the police are friendly.” He was joking, but not entirely. Later, when I asked Nora about that strange scene at the border, she said, “I saw the power of music to transform people.”

He and his wife returned to Estonia in the early 1990s, but he is no less forgiving of the current Russian government under Vladimir Putin. He has dedicated concert performances to Mikhail Khodorkovsky, the exiled Russian businessman, and Anna Politkovskaya, the murdered Russian journalist. “I am not a politician; I’m a dilettante, ” he told Lubow. “But this is normal thinking of people who came through this Soviet hell.” In a 2014 New York Times interview, Pärt told William Robin: “I have never participated in political art…. My compositions have never been political, even the Khodorkovsky Symphony has really nothing to do with politics. It is written on text of prayers.”

In 2014, Pärt received an honorary doctorate from St. Vladimir’s Orthodox Theological Seminary in Yonkers, New York. “There’s this kind of universally accessible spirituality going on, and yet it evidently has some particular sources in the context that he locates his own prayer life”, said theologian Bouteneff, a professor at St. Vladimir’s. “It’s where he goes to church, it’s the texts that he reads, the ancient Greek fathers…. This is what he feeds his soul, and therefore: Is there some connection between this universally perceived and universally accessible spirituality, and the particular foundations in Eastern Orthodoxy?”

Pärt explained in the same interview that his music reflects his values, which he acknowledges coincide with his Orthodox beliefs. “If the listener also perceives what I felt while composing, I am very happy about it…. I am not taking the task in my music to discuss some religious or special Orthodox values. I am trying to reflect the values in my music that could touch every individual, every person.”

The dynamic tension between freedom and discipline is crucial to appreciating the work of Arvo Pärt. One without the other is dangerous, he asserts. Not only does religious faith impose discipline necessary to lead lives of ordered liberty, but it as well promotes the freedom humanity requires to attain its fullest potential.

Bruce Edward Walker, a Michigan-based writer, writes frequently on the arts and other topics for the Acton Institute.