William Penn and the American Experiment of Liberty

There are competing creation “myths” about the origins of American liberty. The Jamestown, Virginia settlers of 1607 have vied with the Pilgrims of the Plymouth Colony in New England for dominance in America’s self-understanding of its origins. In this lecture Alan Crippen argues that these narratives have obscured the role of William Penn and his “holy experiment” of Pennsylvania as the most influential seedbed of American liberty. Neither New England, nor Virginia colonies were the doorway to America’s future, but rather it was the political society envisaged and actualized by a broad-minded religious dissident, the Quaker son of an aristocratic Royal Navy Admiral. Penn bequeathed to America its first successful experiment of liberty – Pennsylvania, and it became a working model of freedom for a new nation to emulate. Indeed, in 1826 Thomas Jefferson referred to William Penn as “the greatest lawgiver the world has produced.”

This lecture will be livestreamed @ 12 noon on March 21 for those who cannot join in person. 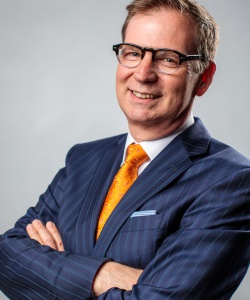 Alan R. Crippen II is Chief of Exhibits, Programs, and Public Engagement for the Faith & Liberty Discovery Center at American Bible Society on Independence Mall in Philadelphia, Pennsylvania. Previously he served as founding president of the John Jay Institute, an educational and professional civic leadership development organization. Alan has more than two decades of experience in non-profit executive management and college level teaching including vice-president for policy and academic affairs at Family Research Council in Washington, D.C., senior fellow at the Institute for Family Studies in Colorado Springs, Colorado, and director of development at International Students, Inc. in Colorado Springs. His military service includes platoon and artillery battery command as well as various battalion staff operations and planning positions in the U.S. Army. Alan holds degrees from Westminster Theological Seminary (M.A.R.) and Cairn University (B.S.). He is an ordained clergyman with canonical residence in the Convocation of Anglicans in North America (CANA) and membership in the Anglican Church in North America. Alan and his wife, Michelle, have a teenaged daughter, four married adult children, and six grandchildren and make their home in Philadelphia, Pennsylvania.