From 1930 until 1960, Venerable Fulton J. Sheen was one of the most beloved Catholic priests in America. He was primarily known for his popular books, radio broadcasts, and Emmy-award winning television show Life Is Worth Living. However, Sheen was also a deft and serious thinker on efforts to bring Americans in closer alignment with the Christian tradition, especially that of the Catholic Church. Beneath his wide smile and silly jokes was one of the most accomplished Catholic intellectuals in American history and whose work deserves closer study, a study which yields a strict yet friendly criticism of American economic and political life.

This lecture will be livestreamed @ 12 noon on May 30 for those who cannot join in person. 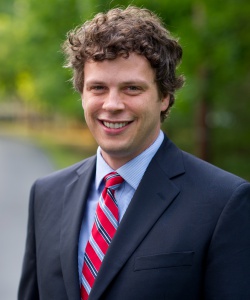 James M. Patterson, Ph.D. is an assistant professor of politics at Ave Maria University. He received his B.A. in Political Science and Media Studies at the University of Houston in 2002 and his Ph.D. in American Politics from the University of Virginia in 2012. His areas of research include race, religion, and American political development. He has held research positions at the Program for American Values and Institutions at Duke University and the James Madison Program in American Ideals and Institutions at Princeton University, as well as teaching positions at Hampden-Sydney College and Gettysburg College.

He has published academic work on Dr. Martin Luther King Jr., Venerable Fulton J. Sheen, and biblical narratives in American political rhetoric, and he has published more popular essays and book reviews for Modern Age, Society, Library of Law and Liberty, and Public Discourse. In early 2019, the University of Pennsylvania Press published his first book, Religion in the Public Square: Sheen, King, and Falwell. This book examines how very different religious leaders sought to influence national politics by preaching their interpretation of American political foundations. His next research project examines the religious assumptions beneath contemporary social science methodology. Professor Patterson is an Acton University alumnus and a member of the Values & Capitalism Program for the American Enterprise Institute. He lives in Ave Maria, Florida, with his wife Julia and his three children.