A Judicial Renaissance? The Trump Administration & the Future of the Federal Judiciary- Leonard Leo

The US Supreme Court hangs in the balance when it comes to some of the most important areas of the law, with a couple of more vacancies possible, and there are an unprecedented number of vacancies anticipated on the Federal appeals courts. This state of affairs presents a unique opportunity to transform the courts so as to engender a greater respect for limited, constitutional government. 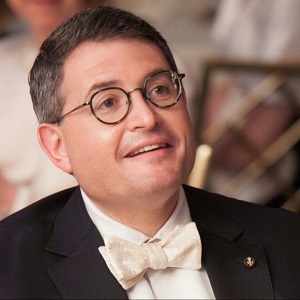 Leonard Leo serves as Executive Vice President and a member of the board of the Federalist Society for Law and Public Policy Studies, an organization of around 70,000 individuals that is premised on advancing limited, constitutional government. In that capacity, he has helped to build a nationwide infrastructure of lawyers, judges, and business leaders who seek to foster the application of our nation's Founding principles through the projects of the Society as well as other independent projects of mutual interest and concern in the legal and policy worlds on which they band together.

Mr. Leo was appointed by President George W. Bush as well as the United States Senate to three terms to the U.S. Commission on International Religious Freedom, where he served as chairman for three terms. He also served as a U.S. Delegate to the U.N. Commission and U.N. Council on Human Rights. He has been active in a number of Catholic organizations, serving as a member of the Board of Trustees of the Catholic University of America, as Chairman of the National Catholic Prayer Breakfast, and as a member of the Sovereign Military Order of Malta.

Mr. Leo was the recipient of the 2009 Bradley Prize, along with the other founders and directors of the Federalist Society, for his work and efforts in advancing freedom and the rule of law through the organization.  He is the co-editor of Presidential Leadership: Rating the Best and the Worst in the White House (2004), as well as the author of opinion editorials in the New York Times, Wall Street Journal, and Washington Post, among other publications.

Mr. Leo holds degrees from Cornell University and Cornell Law School. He presently resides in northern Virginia, where he and his wife Sally have raised their seven children.

Metered ​street ​parking ​is ​available. ​Please ​bring ​sufficient ​change ​with ​you ​for ​meters. ​You ​can ​also ​pay ​for ​parking ​with ​the ​ParkMobile ​App ​on ​your ​smartphone ​(iOS ​and ​Android). ​There ​are ​also ​paid ​parking ​lots ​nearby. ​Please ​enter ​building ​off ​of ​Sheldon ​Blvd.